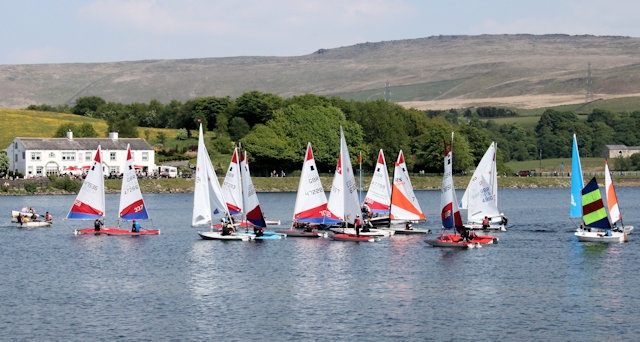 Summer time often brings tricky windy conditions and sometimes little wind at all. On Saturday 9 July, five young sailors from Hollingworth Lake Sailing Club went to the marine lake at Southport for another event of the Junior Travellers Series. They produced a strong set of results. Jacob Din, in a Laser, was second overall. Lauren Marsh, in a Topper, was 5th, and Millie Hayfield was the leading under 14 age sailor coming in at 6th overall. With Annabel Hayfield and Jessica Marsh coming in 11th and 17th respectively, this was a very successful day.

On Sunday, at Hollingworth Lake, the wind was particularly fickle and frustrating for racing. However, as ever, Martin Brennan (Solo) showed his ability to find the way to get ahead and stay there, winning all three races.

In the first one, another Solo helmed by Nick Brook was runner up and Richard Mason and Nicola Thomason in a GP14 were third. In the second and third races, it was the turn of Nick Hornsby and his daughter Phoebe, in a GP14 to be runner up. Adam Din and Olivia Zuniga, in a RS200 were third in that second race.

A number of GP14s were out introducing newer members to experience racing with a trusted helm. That gave Mike Smith third place in the third race with Carli Sutcliffe.

During the week, Merlin Rocket sailors had been down to Salcombe Merlin Week for their favourite event. This included eight boats but overall success eluded them.