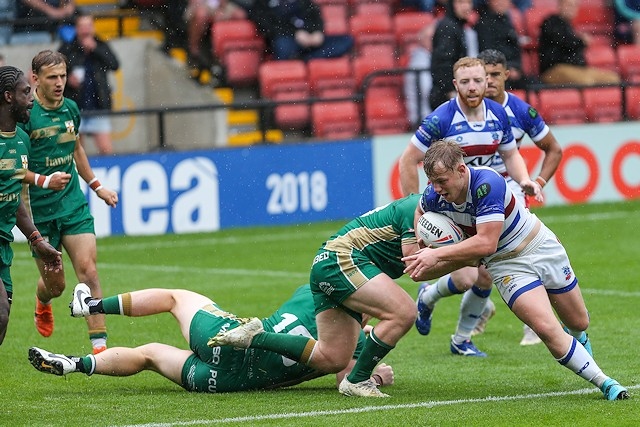 Rochdale Hornets were forced to come from behind to record victory at the Crown Oil Arena on Sunday 24 July, for the second game in a row, after an unconvincing performance at home to London Skolars.

Hornets had trailed at the break but were led to a win by Lewis Sheridan and Cian Tyrer, with two tries apiece helping to secure a 32-14 victory.

In dreadful conditions, at the Crown Oil Arena, it was the visitors who started brightly and raced into an early lead – as they had done in the reverse fixture.

Skolars fullback Jarred Bassett had too much for the Hornets defence as he broke two tackles to run in the game’s first try, from halfway.

Hornets hooker Kieran Rush had posed a threat from the outset, and was pivotal to Rochdale responding quickly with a try of their own.

However, the Giants academy product’s influence was thwarted when he was yellow carded for dissent at the end of the opening quarter.

The London side took full advantage of the superior numbers when Jerome Yates powered over from close range.

Things got even better for Joe Mbu’s side when Hornets failed to gather a grubber kick through, and Harry Kauman pounced to move Skolars into a 14-4 lead.

Rochdale’s ill discipline continued to hurt them as influential forwards, Fuifui Moimoi and Zac Baker, were sin binned within moments of each other - for a high tackle and shoulder charge respectively.

However, Hornets coped well with 11 men and even managed a score of their own – on the stroke of half time – when Ben Forster forced his way over for an important try.

Matt Calland and Gary Thornton will no doubt have been frustrated by the first half performance, but got exactly the reaction they wanted within moments of the second half starting.

Aiden Roden’s fine break breached the London defence before the hooker, on his return from injury, picked out Lewis Sheridan to score.

The stand-in fullback converted his own try, to level the scores.

Sheridan would then come to the fore for his side again, some ten minutes later, when he skipped through the Skolars defence to put his side in the lead for the first time.

The team from the capital thought they’d levelled things up when Elliot Hutchings crossed the whitewash, but the stand-off was deemed to have been offside from the kick chase.

Ben Calland was quickest to react to a fine Cobi Green grubber kick, and the Right Centre dotted down for a crucial score.

Now two scores ahead, Rochdale were forced to defend for much of the final quarter but held out numerous sets - in threatening positions – to record an impressive second half shutout.

Tyrer would then cap off the victory, by getting his second try of the game.

The winger received a looping pass from Paul Brearley and raced in to score, before Rush added the extras with the final act of the game.

The win marks Hornets’ fourth in a row, and also confirms a place in this year’s League 1 playoffs.

However, they will be hoping for an improved performance at next Sunday’s crunch match with local rivals Swinton Lions (3pm kick-off).