You are Here: Home » News » Sport News » Rochdale Hornets will no longer stage the England versus Fiji international fixture 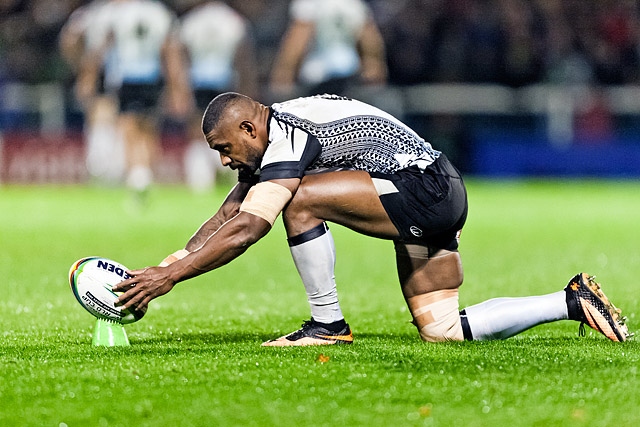 The upcoming friendly fixture between England and Fiji will no longer be held in Rochdale this October.

Shaun Wane’s England side had been set to face Fiji at the Crown Oil Arena on Friday 15 October 2021, just eight days prior to the start of the Rugby League World Cup.

However, the rugby league side says that it is no longer able to host the event as “new terms proposed by Rochdale AFC render the event commercially unviable, despite significant efforts to overcome this.”

Rochdale Hornets Chief Executive Steve Kerr said: “It’s very sad that we have to announce that the England-Fiji game will not be played at the Crown Oil Arena.

“We wanted to bring England to the borough of Rochdale and our ambition was to stage an event similar to the sell-out Ireland versus Fiji fixture in 2013.

“It is a lost opportunity for the whole borough and we apologise to all our stakeholders and fans, who wanted to see the game played in Rochdale as part of our 150-year celebrations.”

The event would have formed part of Rochdale Hornets’ 150th anniversary celebrations – having played their first-ever game on 7 October 1871 – and a nod to Rochdale’s rich and fantastic history with Fiji.

The town’s relationship with the Pacific nation stretches back more than 50 years after the arrival of four Fijian rugby players in the early 1960s, and Rochdale now hosts the second largest Fijian population in the UK outside of London.

Rochdale Hornets will still help host the Pacific islanders in the town, prior to the fixture, which will now be staged at the AJ Bell, Salford, on Friday 7 October.

Kerr said: “It won’t completely make up for losing the fixture, but we are resilient, and we’ll make the best of the opportunity.

“Fiji will stay with us in Rochdale for the week leading up to the game and will train at our facility partners Hopwood Hall. I’m pleased that arrangements can be made quickly with the support of the RFL and our stakeholders.

“We have a number of legacy activities planned and we’re still very excited to inspire more people to play.” 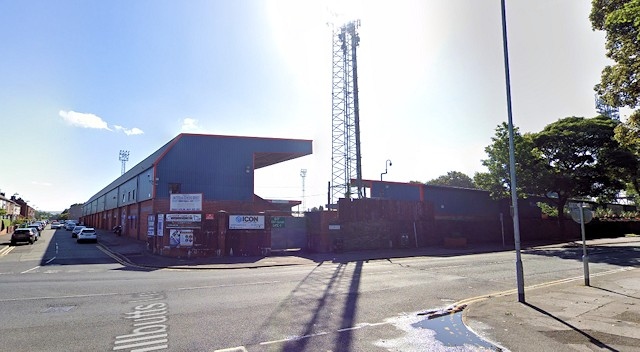 Responding, the football club's board of directors released the following statement: “RAFC as the legal owner is legally responsible for all events that operate at the stadium by any party. All events, including the hosting of Rochdale Hornets fixtures and/or any international fixtures operate under the RAFC safety certificate and therefore the responsibilities of the board of directors.

“Following an EGM on 1 June 2021 which removed two former directors from the board of the club by shareholders, new directors were appointed and, on appointment on 16 June 2021 as new RAFC chairman, Simon Gauge commissioned a review of all property leases and commercial contracts that were already in place.

“Despite a press announcement by Rochdale Hornets on 18 April 2021, during Covid-19 restrictions, that England vs Fiji was to be held at the Crown Oil Arena on 7 October 2021, no signed commercial agreement covering the safety certificate, stewarding costs, terms of use of the stadium or lease for use of the fixture was ever in place for any international fixture between RAFC, the RFL and/or Rochdale Hornets.

“Signed commercial terms for the fixture were requested from Rochdale Hornets but could not be produced.

“Any proposed international fixture is not covered by a 2016 lease in place between RAFC and Rochdale Hornets, and RAFC has never had any commercial discussions with the RFL.

“Due to Covid-19, the 2021 fixture was postponed on public safety grounds and rescheduled to 2022.

“Following a request by the CEO of Rochdale Council to both parties to do our best to agree a commercial agreement which covered all safety considerations and in the spirit of a working relationship, Head of Terms for the international fixture were provided by RAFC to Andy Mazey and Steve Kerr of Rochdale Hornets in March 2022.

“These terms were never accepted. Instead on 19 April 2022, Rochdale Hornets chose to launch a legal action under the 2016 lease against RAFC relating to the fixture pre-action letter of claim sent in accordance with the Practice Direction Pre-Action Conduct and Protocols of the Civil Procedure Rules 1998.

“Rochdale Hornets confirmed to RAFC on 21 June 2022 that the fixture would not be proceeding at the Crown Oil Arena.

“The Board of Directors note that RAFC and Rochdale Hornets have successfully used the Crown Oil Arena together for thirty-four years since 1988 when following the sale of the Athletic Grounds in Rochdale, Rochdale Hornets first moved to Spotland.

“In March 2016, RAFC privately acquired the shareholdings of both Rochdale Council and the Rugby League Facilities Trust in Denehurst Park (Rochdale) Limited which led to the Crown Oil Arena being owed 100% outright. The acquisition was widely welcomed by the then leadership of Rochdale Hornets, the Rugby Football League and Rochdale Council.

“Agreed at the same time as the acquisition of the ground, the club entered into a long-term lease with Rochdale Hornets which was commercially agreed in 2016 and signed by the board of directors of both clubs of the time.

“The purpose of the long-term lease was and is to guarantee Rochdale Hornets security of tenure for its home games but to also set clear parameters for occupation and cost liability.

“The lease is only a lease of part and only permits occupation for Rochdale Hornets:

“For all official Rugby League fixtures involving Rochdale Hornets plus up to three friendlies per season.

“Of an Exclusive Space (allocated at the absolute discretion of RAFC) on Monday to Friday during the club’s normal trading times of 09.00 to 17.00, except for two hours before or one hour after any weekday football games involving RAFC.

“Of the Stadium for Matchdays involving Rochdale Hornets, subject to the operation of the ground’s safety certificate.

“There is no ability for RAFC to break the lease before this date and nor would the board of directors want the lease broken given the 34 year association between the two clubs at the Crown Oil Arena.

“Rochdale Hornets do have the ability to break the lease every two years by giving RAFC twelve months written notice and paying rent up to that termination date and vacating the property on or before that date. The next ability that Rochdale Hornets has to serve notice is on 1st December 2022 if they chose to do so.

“Maintenance of the ground, pitch management and annual pitch renovation is all at the cost of RAFC with no contribution by Rochdale Hornets other than the £11,000 rent.

“The cost of maintenance of the ground, pitch management and annual pitch renovation cost RAFC over £0.4m per annum.”

In response to the RAFC statement, Rochdale Hornets released a further statement on their web site:

"We are disappointed that RAFC have chosen to publish details of the 2016 lease which exists between the two parties. Such commercial terms should have remained a matter for respective boards.

"Several disputes have arisen which started with a meeting in early 2022, when members of the RAFC board informed Rochdale Hornets we did not have a valid lease. New heads of terms were subsequently presented to Rochdale Hornets following the meeting, which would impact Rochdale Hornets and significantly increase the cost of operating from the stadium.

"Rochdale Hornets sought legal advice in relation to this matter and other disputes that have since developed. It has been confirmed that the 2016 lease is valid, a position that RAFC now accepts.

"Both parties remain in dialogue over the remaining disputes which we are attempting to reconcile. This includes, ground use, change of our office space and loss of our retail facility amongst others.

"Rochdale Hornets set about organising an international fixture working collaboratively with RAFC senior management, one of which was assigned to the event management group by the RAFC board. Several meetings took place and commitments were made with the full knowledge and support of RAFC. There was no requirement from the landlord to enter into separate commercial terms for this event in 2021.

"We are all aware the pandemic caused much disruption to the sporting calendar and the subsequent international game was rescheduled for 2022, using the same agreed terms. However, following a change of the RAFC board and management, Rochdale Hornets were asked to present the terms of the agreement. We spoke at length as to how that agreement was made and sent a summary document informing the new RAFC board of the previous arrangements, which were made in good faith, and in line with the lease clause detailed above. RAFC requested that a separate formal commercial agreement would now be required. After multiple attempts of remedy, Rochdale Hornets withdrew from its position, clarifying with RAFC that we could not accept the new proposal as it would render the event commercial unviable.

"It is with regret and great sadness that RAFC did not wish to honour the original agreements or indeed accept counter proposals to reach an agreement to stage the event in Rochdale."

Can I get a refund or transfer my ticket?

Kerr added: “We are genuinely delighted that the game will still be played and anyone who has bought tickets can have them transferred.

“This is important, as any tickets transferred directly benefit Rochdale Hornets and will support our hosting costs.”

Fans who have previously bought tickets with Rochdale Hornets can transfer your ticket to the AJ Bell, or request a refund.

To apply for a refund please email tickets@hornetsrugbyleague.com with confirmation of your booking.

Fans have until 12 August to claim a refund so that tickets can be transferred to the new venue. Transferred tickets will be issued by Rochdale Hornets to your home address. Fans opting to have their ticket transferred do not need to take any action.

All revenue from ticket sales will be retained by Rochdale Hornets to support hosting Fiji and all fans transferring tickets will receive a £5 voucher towards the new England shirt launched.

Your codes will be sent after the closing window for refunds.

Fans wishing to buy tickets for the event can now do so via the RFL.