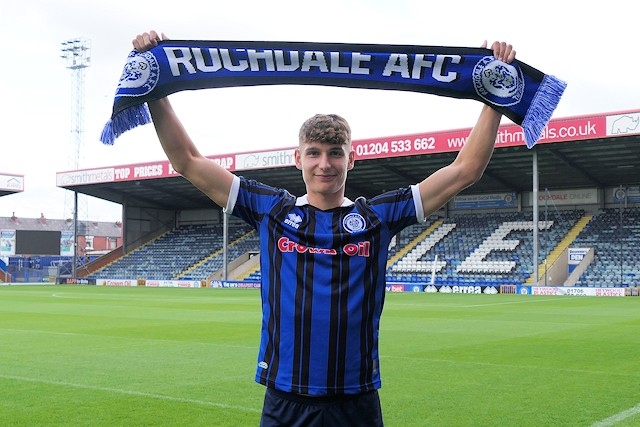 Both players have joined on season-long loan deals from their Premier League clubs.

18-year-old Nelson, a product of the Foxes academy, has been playing regularly for City’s Under-23s and has also featured for the first team in a number of UEFA Europa League and Premier League squads.

A former Academy Player of the Season Award winner, the defender who has previously represented Scotland at youth international level, has also most recently been capped by England Under-18s.

After putting pen to paper, he said: “I’m delighted to have joined the club and I can’t wait to get started. It’s a great opportunity for me.

“I’ve had many great experiences at Leicester that I have taken in [and learned from] and it has given me a little taste of what I could get in the future, but that can only happen if I work [hard] towards that, and a loan move here will really help me progress in my career.”

Manager Robbie Stockdale added: “It’s a big coup for the club to attract a player of Ben’s calibre.

“It’s great that a Premier League team like Leicester City and a manager like Brendan Rogers trusts us with Ben’s development.

“I’m sure he’ll do well here, but it will also be a challenge for him at the same time.”

Cieran Slicker, 19, was a big part of Manchester City’s Elite Development Squad last season, making 14 appearances as they clinched the PL2 title, as well as regularly training and travelling with the first team.

He has been with them since the Under-9s, progressing right through the Academy to sign a professional contract in July 2020.

The shot-stopper has also been capped at various youth levels for Scotland, including five Under-21 appearances.

“I’m buzzing,” said Slicker. “When I first got the information about Rochdale [wanting to sign me] I was really excited about the opportunity it was going to bring for me.

“I’m ready for a new challenge which I’m excited for. The aim for me is to play games on a bigger stage. The Academy games are good but I think I’ve kind of past that stage now and I’m ready to kick on.”

Manager Robbie Stockdale commented: “He’s a quality young goalkeeper that will provide really good competition for Rich [Richard O’Donnell] and help develop the younger goalkeepers around him as well.

“We thank Manchester City for their help with that one. We needed two senior goalkeepers in the building, and I think that also benefits the younger ones as well, in that we can get them out on loan for men’s football.”