You are Here: Home » News » Sport News » Castleton Timber and Heywood Plastics sponsor a stand at the Crown Oil Arena 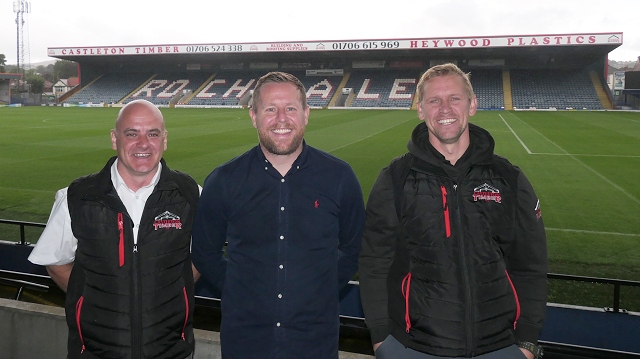 Castleton Timber and Heywood Plastics has become the new sponsor of the Willbutts Lane Stand of the Crown Oil Arena.

The local company is also sponsoring the back of the players’ warm-up jackets.

Owners Iain Fay and Chris Walker are both big Dale fans and have supported the club in recent years with perimeter boards, but with the expansion of their business, they found that the natural progression was to increase their sponsorship and visibility at the Crown Oil Arena.

Adrian Hunt, Rochdale AFC’s Head of Commercial, said: “From the very first conversation we had with the guys, they were interested in increasing their support of the club and using the club’s platform to promote their brand to the fans of Rochdale AFC and the local community.

“Here at Rochdale AFC, we are extremely thankful to Iain, Chris and the teams at Castleton Timber and Heywood plastics for their continued support, and we look forward to welcoming them along to the games at the Crown Oil Arena during the season.”

Castleton Timber and Heywood Plastics Managing Director Iain Fay commented: “Being a newly formed local business, we understand how important it is to help and support other local businesses and sports club/teams.

“We have been watching the Dale from a young age, so it’s a great honour that we are now able to help and give something back to ‘our’ home town team, especially after the very tricky last couple of years on and off the field.”

Castleton Timber has also covered costs for a defibrillator in Castleton, supplied materials for the village’s memorial garden, and supplied and made planters at the railway station.

A charity golf day last year by the business raised £1,810 for Springhill Hospice.

As global temperatures soar, The Climate Challenge College is offering young people the skills to tackle the climate crisis

Young people are more concerned than ever about climate change. Recent record temperatures have reminded us all about what’s at stake.
Now the first Climate Challenge College in...

This October will mark the end of an era for the popular Lily May ladies’ boutique in Heywood.
After seven years of successful business, Lily May will close its doors on 22nd...