You are Here: Home » News » Sport News » Fun in the sun at tag rugby fest

Fun in the sun at tag rugby fest 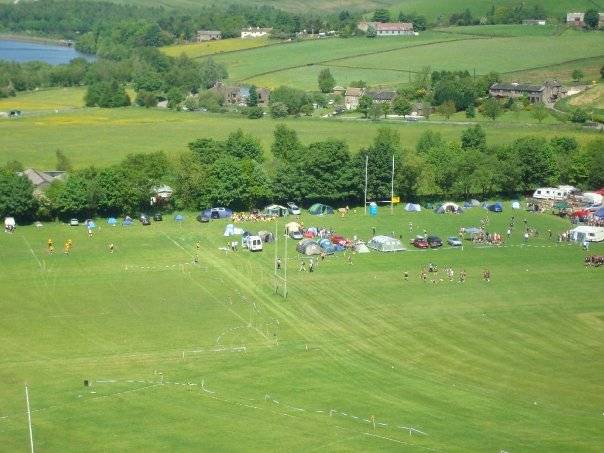 The Rake at Hollingworth Lake, the venue and campsite for the tag festival.

The inaugural Rochdale Swarm International Mixed Tag Rugby League Festival proved to be a huge success, with the sun beating down on the picturesque Hollingworth Lake venue.

Everyone who attended couldn't fail to be impressed with the ground breaking tournament.

Played in a fantastic spirit by all the teams, the players put on a superb display for the watching crowd.

The early group stages saw the teams split into four divisions, with each group containing an International side and at least one Rochdale based team.

To add to the International flavour The Halton Womens "A" team, nicknamed the "The Flintstones", fielded the giant Kiwi forward and former Widnes great Esene Faimalo, while the Rochdale Swarm were able to call on the services of former Australian NRL player Kurt Wrigley.

After the group stages the teams went into various knockout stages with each team getting a taste of sudden death Rugby League.

The Legions outfit drawn from Littleborough Rugby Union and the Hillside Hawks Womens Rugby League teams proved a little too experienced for the Swarm's development side, which contained half a dozen players who had never played any sort of Rugby before the Festival.

The Bowl Final was an all Widnes affair between the two sides drawn from the Halton Womens and Girls Rugby League Club. With the "Flintstones", who had knocked out the Swarm's senior team in the semis, edging the "Globetrotters" 5-3.

The Plate final saw the Manchester Chargers take the spoils over the Leeds based Rawden Rhinos. The Chargers, who are primarily a Touch Rugby Club, adapted well to the new discipline of Tag Rugby League, winning the Plate trophy in a very close game. The Rhinos deserve credit as they had several late withdrawals from their squad but still turned in a highly commendable display.

The Final proved to be an epic affair won by the Rochdale based Littleborough Lightning.
The Lightening, like their sister team the Legion, were drawn from Littleborough Union and Hillside Hawks Womens Rugby League teams and came up against pre competition favourites Fiji.

Each side matched each other try for try but the Lightening were able to take the game thanks to a Female try bonus point.

The relief and delight on the `Boro faces at the final whistle showed how committed they were to hold on to their slender lead.

All in all it was a fitting final to cap a fantastic day.

The Finals most Valuable Player Award went to The Lightenings Joannie Aspen for her game winning try.

All the day's awards were presented by Rochdale based Irish Rugby League International Ged Corcoran.

Ged also made a special award to the player he felt best opitimised the day and who he felt displayed the most effort and endeavour, this award went to the Manchester Chargers No.9 Julie Walker.

After the presentation the teams partied into the early hours to bring the curtain down on what was truly a magnificent advert for Tag Rugby League.

Plans are already ongoing for next years Festival, which is hoped to be even bigger and better.