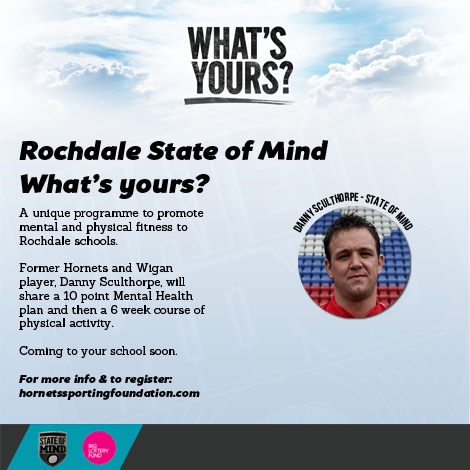 Rochdale Hornets Sporting Foundation has partnered with ‘State of Mind’ – a charity dedicated to harnessing the power of sport to encourage positive mental health.

Mr Sculthorpe will share a 10 point mental health plan followed by a six-week course of physical activity across schools in the borough of Rochdale.

The programme launch will take place on Friday 25 September at ASDA Rochdale and will consist of a business breakfast commencing at 7:30am, followed by the official launch of Rochdale State of Mind and the unveiling of a blue plaque celebrating the 120th anniversary of rugby league, and Rochdale Hornets’ role as one of 22 founding members of the Northern Union.

Mr Sculthorpe said: “Positive mental health is of vital importance. I am glad to be involved with Rochdale State of Mind and be able to encourage young people to discuss their mental health openly and use sport to promote mental and physical wellbeing.”

The Rochdale Hornets Sporting Foundation is a Charitable Incorporated Organisation registered with the Charity Commission and has been established to provide more opportunities for the people of Rochdale to participate in healthy sporting activity, largely through the playing of rugby league. It is led by a group of inaugural trustees drawn from the local business community.