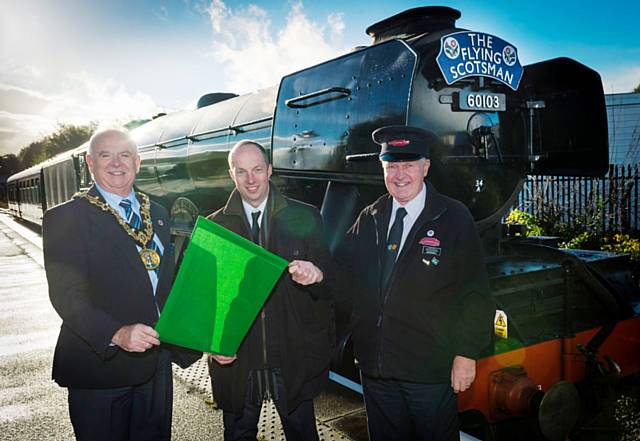 Riley & Son (E) Ltd, the company behind the restoration of the iconic Flying Scotsman, has moved back into the borough where it originally started out in 1988.

Riley spent ten years restoring the renowned locomotive, which was the first steam train to hit speeds of 100mph back in 1929, before it returned to the rails at the beginning of this year.

The company continues to regularly operate and inspect the famous engine, whilst also looking after its own fleet of Black 5 steam engines, which travel on a number of national railway network lines, including the Fort William to Mallaig Line where Harry Potter was filmed.

After receiving a grant from the council, the company has returned to its roots of Heywood.

Colin Green, director at Riley & Son, said: “We started out in Heywood, so we had a family connection there. We were given the opportunity to expand and to work in more modern facilities – we also received support from the Rochdale development fund and the council, which is the first funding we’ve ever had.

“We plan to expand even further and take on more apprentices as we do. It’s exciting times.”

Since the move into Sefton Street, next to Heywood station on the East Lancashire Railway, Riley has taken on four new members of staff, along with ten apprentices from Hopwood Hall College who are also learning their craft there.

“The training I have received on my apprenticeship has not only given me an ideal path into this industry, but helped develop me as a person. By bringing in young apprentices, the company becomes a larger part of the community and ensures these skills are transferred across generations – instead of being lost.

“I also think it motivates the long-standing professionals to stay motivated towards producing a future for the industry.”

Mayor of Rochdale, Ray Dutton, said: “It’s so pleasing to see the Rileys putting another foundation into our town; a big loss for Bury, but a big gain for Rochdale – the infrastructure is just amazing.

“I’ve spoken to young apprentices who are really excited about the move; it will offer them great career opportunities in what will hopefully be a big step forward in the railway industry once again.”