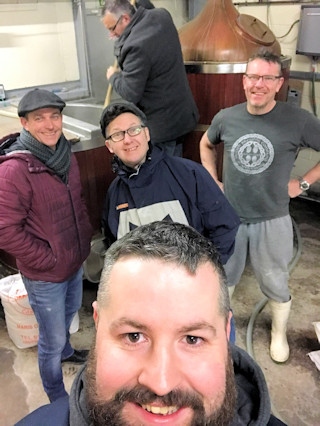 Four of Rochdale’s most popular pubs have joined forces to brew their very own beer, aptly named ‘CoHOPerative’.

The ale is a collaborative effort between The Flying Horse, The Baum, The Regal Moon, The Wellington and Pictish Brewery, the closest brewery to the town centre, making the drink a truly local affair.

All the landlords – Ben Boothman (The Flying Horse), Simon Crompton (The Baum), Chris Riley (The Regal Moon) and Michael Howarth (The Wellington) – went at 5am on a cold Tuesday morning to help brew the beer. A blend of citra and cascade hops will give the 4.2% beer a light colour and a hoppy citrus flavour.

Ben said: "We thought it would be great to come together over Christmas and brew a beer that we know the customers are asking for - light hoppy beers around the 4.2% mark is what the current ale drinker is craving. We feel it is a fantastic introduction beer for those wanting to give ale a try - but it is just a one-off for now."

Michael added: "It was great to be at a brewery getting our hands dirty. The beer will be outstanding and it has been a pleasure working with everyone.”

Paul Wesley, owner and brewer at Pictish, commented: "It was a pleasure to welcome Ben, Simon, Chris and Mike into the brewery. Their input in helping to design the recipe and enthusiasm for getting hands on with the brewing process made it a truly ‘cohoperative’ project.”

CoHOPertive will be available in all four pubs from Wednesday 13 December.