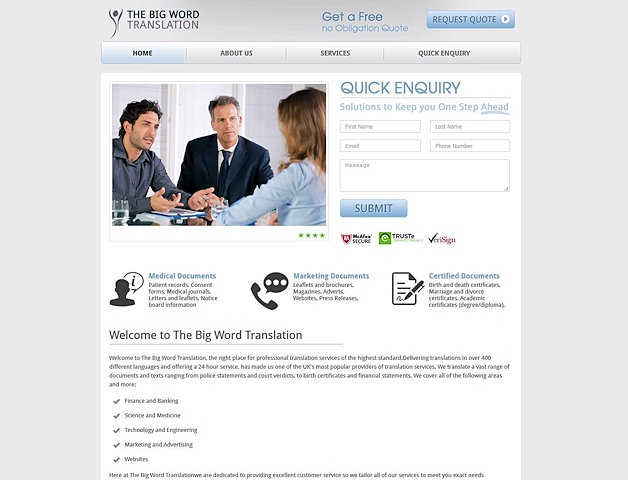 A Rochdale interpreting service that set up bogus websites to mimic a world-leading language translation company managed to divert a third of its internet traffic for almost three years, it was revealed in court on Wednesday.

Little-known Language Empire Ltd masqueraded as the UK government’s go to interpreter and translation provider, thebigword, at two websites 'specifically designed' to syphon off business from the global contractor.

During 34 months of passing itself off as the leading language business it is believed Language Empire Ltd landed lucrative translation contracts from the NHS, police forces, civil service departments and blue-chip companies worth tens of thousands of pounds.

In a landmark judgement at London’s Intellectual Property Enterprise Court, the Rochdale-based business - based at Deeplish House on Milkstone Street - was ordered to pay double the damages sought by thebigword, after a judge agreed it made “significant sales” by converting enquiries from the websites.

The court heard that once the websites were taken down after being live for two years and ten months, thebigword – which lists on its website several top 100 global brands, government departments, UK police forces and NHS trusts as clients – saw an instant 50% rise in its website traffic.

Judge Melissa Clarke described the rise in traffic as “the best quantitative evidence I have of the effect of the websites on the claimant’s business.” And she described it as a “diversion of a significant amount of the claimant’s potential business”.

The imposter websites went live during the second half of 2014, the court heard, with logos using the words ‘The Big Word Translation’, and content that read: 'Welcome to The Big Word Translation, the right place for professional translation services of the highest standard. Delivering translations in over 400 different languages and offering a 24 hour service has made us one of the UK’s most popular providers of translation services'.

The sites also included calls-to-action that offered a 'Free no obligation quote', a copyright notice '© 2014 The Big Word Translation. All rights reserved' and a contact form that delivered fresh enquiries directly to the websites’ developer and SEO ‘expert’ Rajeev Singh, who Zaman hired to them set up.

Singh funnelled enquiries back to Yasar Zaman through an email address belonging to his brother, Nasir Zaman. From there the diverted business was converted into sales, likely at the same 75% success rate that thebigword enjoyed, Judge Clarke asserted.

After uncovering the sham sites thebigword sent pre-action correspondence through intellectual property lawyers, Virtuoso Legal of Leeds and London, on 24 February 2017 alleging infringement of trade marks and passing off, to which Language Empire made no response. The firm did, the court ascertained, take the websites down on Yasar Zaman’s instruction shortly after.

Zaman later claimed in an affidavit submitted to the Intellectual Property Court that he had not responded to Virtuoso Legal’s letter as he assumed it was “a scam” when he didn’t recognise the name of thebigword’s holding company Link-Up Mitaka. Judge Clarke called the notion “fatally undermined” as “a glance at the letter” revealed “Link Up Mitaka Limited trading as thebigword”. Barrister Nick Zweck, appointed by Virtuoso Legal, later put it to Yasar Zaman in court the real reason he hadn’t responded was “he panicked, took the websites down and hoped that would be sufficient to make the matter go away”.

London’s IPEC also heard that as soon as a court date was set for judgement Language Empire Ltd responded with a legal letter to thebigword insisting the domains were dormant, had not been used and were registered by “an errant temporary marketing consultant” who had used his debit card to buy the domains. That person was Rajeev Singh.

It later maintained it had “not received any enquiries from the two domains” and did not “hold any articles, documents or materials in relation to the domains”. In response to a demand for traffic statistics for the two sites, Zaman’s appointed solicitor also said Language Empire “did not receive any lead generations from the two domains” and “had no direct statistics for leads generated”.

Zaman also offered that a change of email server in 2014 meant he no longer had any record of email communications with Singh.

After Virtuoso Legal produced screenshots of the live sites, Zaman admitted in his affidavit that he received 38 enquiries in 34 months from the sites and produced “a complete list of enquiries made via the websites”, which Judge Clarke deemed more like “a cherry-picked list” constructed “with the intention of hiding the true number of enquiries made from the websites”.

She expressed curiosity as to why the 38 enquiries all fitted “within a period of nine months in 2016” and suggested they even represented “a significant underestimate of the number, value and quality of the enquiries made from the websites during that nine-month period”.

On inspecting the list further, she noted: “It looks as though someone has sat down with a print out, a pair of scissors and a photocopier to put this document together.” She said: “I am satisfied that this is more likely than not to be just a subset of a wider set of data and that more enquiries were received at other times.”

Judge Melissa Clarke also highlighted “an extraordinary four-page letter” Zaman sent to Singh in July 2017 and later used as evidence. In it he “recalled the creation of websites utilising the interpreter and translator keywords”.

Zaman also wrote: “The truth is, you never provided us with enquiries which were received from these two specific domains, because the project was abandoned and we never made any payment to you for leads/enquiries originating from these two websites. Can you confirm this specific point and confirm this point is true?” The judge highlighted how the letter set out “exactly the case that the defendants are making” to the extent the letter could be deemed “an entirely leading and self-serving document”.

In reviewing the case Judge Clarke described Yasar Zaman as “an extremely poor witness” and his evidence “a tangled mass of contradictions, inconsistencies, unlikelihoods, implausibilities and untruths which obscure any truthful evidence he may have given, such that I cannot identify it”.

Using the list of 38 enquiries as the only foundation she had to establish damages, the judge accepted thebigword’s estimate of value of the enquiries to be £63,000 for translation and interpreting services. Using their profit margin percentages for each of those services, deemed its lost profit to be £28,200. Attributing that figure to the total period in which Language Empire operated its bogus websites, she deemed it to have made £106,533 and applying a 33% uplift to account for substantial value missing from the list and repeat business lost from diverted enquiries, she set damages to be paid to thebigword at £142,044.

In an unprecented ruling at London's IPEC, Judge Clarke lifted its cap on the legal costs it could award from £25,000 to £98,250 to accommodate the additional legal fees incurred by thebigwords as a result of Language Empire’s 'abuse of process'.

After judgement was passed at London’s IPEC, Virtuoso, Legal’s Liz Ward explained: “We were suspicious about the whole operation from the start. Proceedings were served at Language Empire’s offices in Rochdale but there appeared to be no operational office at that address. Zaman’s home was nearby. He wasn’t there either when papers were served.

“Although online Language Empire looked quite big, it was apparent their physical presence hardly existed. It became clear that Language Empire was servicing some important police and NHS clients, but not paying their self-employed interpreters or anyone else. We later found a whole Facebook page dedicated to disgruntled outsourced staff who hadn’t been paid.”

Chairman of thebigword, Larry Gould said: “We are trusted around the world and the integrity of our brand remains intact. We are, of course, deeply disappointed and concerned at the impact that this potentially had on our business and the reputation of our industry.”