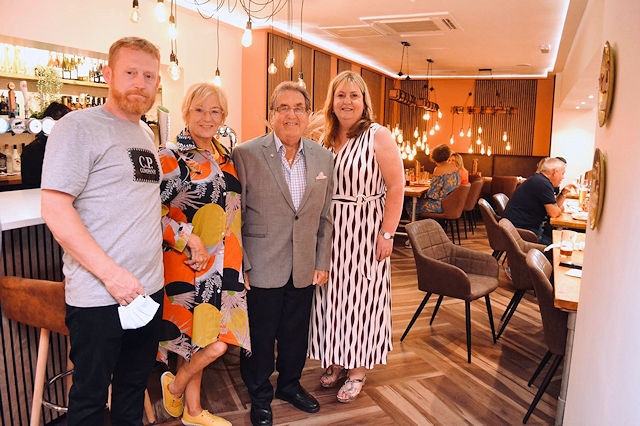 A new restaurant has opened at The Albany Hotel in Heywood.

The Orchard Restaurant, a traditional English bistro, opened on Thursday 10 June in what previously was the hotel’s function room.

The change came about during lockdown when the hotel’s owners of four years, Tracey and Gordy Lawrie, saw a gap in the market for a place for people to meet up with family and friends whilst enjoying a meal and drink.

Together with managers Sarah Ford and Mark Stubbs, the idea turned into reality and the opening night was a roaring success with invited guests – including the hotel’s former owner Councillor Peter Rush – enjoying the new menu.

A former mill owner’s house called Orchard House, it became known as The Albany in 1984 when under the ownership of Councillor Rush and his wife, Monica. They then purchased two buildings next door and expanded the business. A communal venue which used to host Rotary meetings, there were both football and golf teams, plus lots of business trade and weddings.

Councillor Rush ran The Albany until 2004, and says he “enjoyed every minute of it.”

On the new Orchard Restaurant, he said: “It was brilliant to see. It’s very modernised, and the restaurant food was excellent. The staff are young and enthusiastic which is good.

“The Orchard is a very welcome move into hospitality which complements the other offerings in Heywood, and I wish them all the very best.”

Restaurant manager Sarah Ford said: “It was so nice to welcome people to our restaurant and show them what we now have to offer. Peter owned the Albany many years ago, so it was wonderful for him to see the changes.”

The Orchard Restaurant is open on Wednesdays (4pm to 10pm), and Thursday through to Sunday (12noon to 10pm).