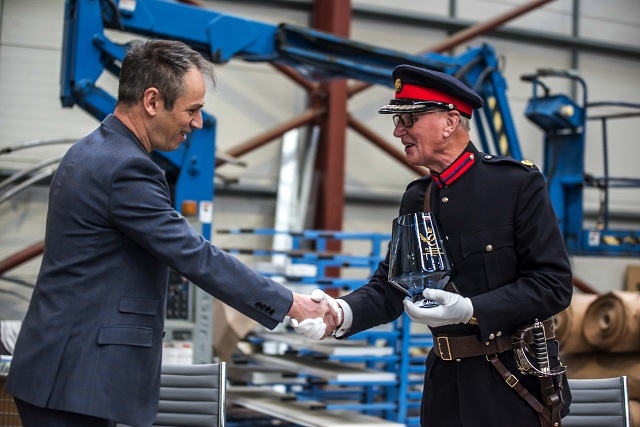 Rochdale manufacturer Crystal Doors has received its Queen’s Award for Enterprise for Sustainable Development in a special ceremony attended by a Deputy Lieutenant for Greater Manchester.

Deputy Lieutenant Ian Sandiford visited the factory, which produces vinyl-wrapped doors and components, on 24 November to deliver the prestigious award on behalf of the Queen.

The award – announced earlier this year – was given in recognition of Crystal Doors’ outstanding achievements in championing sustainable business and green manufacturing.

A series of sustainability interventions over a six-year period include smart autonomous machinery, energy efficient technology, solar panels, electric vehicles and biomass heating fuelled by the factory’s own wood waste.

Also attending the event alongside the workforce were representatives from GC Business Growth Hub and Made Smarter, two regional business support programmes that have been instrumental in helping the company to become a national green business success story.

Ian Sandiford, Deputy Lieutenant of Greater Manchester, said: “The Queen’s Award is the most prestigious award given for business performance; they are not easily earned. This year, 17 awards for Sustainable Development were made nationally, and only two in the North West. It is certainly a high standard to live up to.

“It gives me great pleasure to congratulate Crystal Doors on behalf of Her Majesty for their remarkable achievement. The Lieutenancy is mindful of the environmental problems we’re facing – we are currently planting 15,000 trees in Greater Manchester – so I’ve got nothing but admiration for everything Crystal Doors has achieved.”

Richard Hagan, Managing Director at Crystal Doors, said: “Officially receiving our Queen’s Award in front of the whole team and some of those who have supported us on our journey was so important because none of it would have been possible without their efforts.

“As well as our fantastic employees, I must also give thanks to organisations like GC Business Growth Hub, Made Smarter and Rochdale Council for providing their support. I feel very proud and privileged to have such a great network around me.

“We are a small company with a turnover of £3 million, but we are making an impact way beyond our size. The manufacturing industry is beginning to wake up and take notice of the climate and ecological emergency around us, and we are a proven example of how to successfully make a difference and become a stronger business as a result.”

Councillor John Blundell, cabinet member for economy at Rochdale Borough Council and RDA board member, said: “Rochdale has a thriving business community which is doing great things, often on the global stage, but they don’t always shout about all the great work they do. That’s why I’m incredibly proud to see Crystal Doors being recognised for their success.

“As a council that’s declared a climate emergency and that has pledged, alongside local authorities across Greater Manchester, to become net zero by 2038, I’m particularly impressed that Crystal Doors are demonstrating that you can run a really successful business while also actively supporting the environment.

“It’s clear that they’re the leading the way on the climate agenda and I hope other businesses follow their example, wherever they can.” 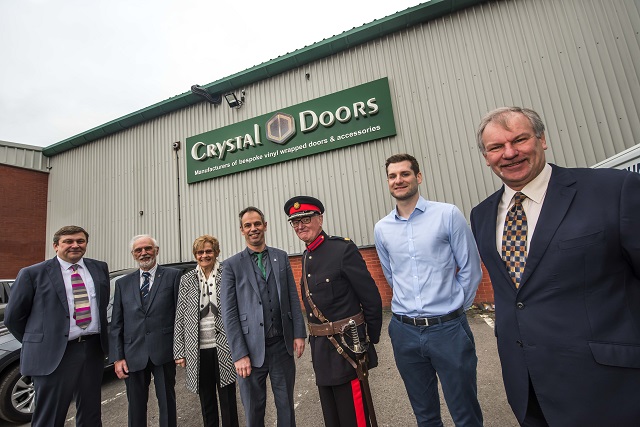