Police dogs kitted out with specialist armour from Rochdale manufacturer 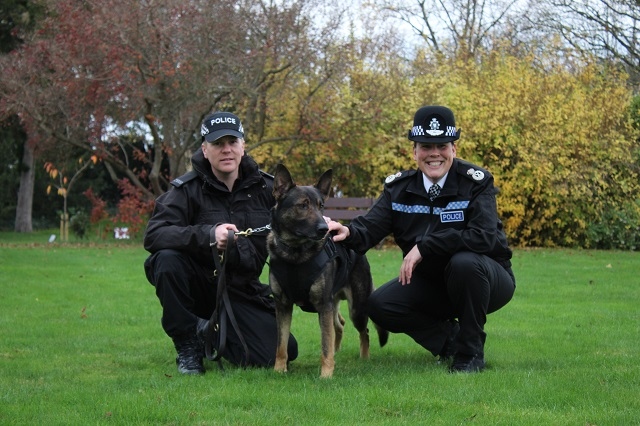 The Tornado harness is a lightweight armoured harness that has been specially designed to protect police dogs and is being used by both West Mercia and Staffordshire Police.

The armour construction offers a multi-threat protection level and is exactly the same as the armour worn by humans.

With many years’ experience in designing and manufacturing armour, Defence Composites had already spent some time on developing a protective canine harness. To meet the specialised requirements, the company collaborated with Roger Utley, of UK Canine Ltd, which creates equipment for service dogs and handlers.

Roger has many years of expertise working as a dog trainer for the armed services and provided essential advice to enable Defence Composites to achieve an ergonomic design for the working dogs.

The harnesses have also been trialled by a number of canine specialists and training companies.

The development of Defence Composite’s canine armour is now being accepted as standard police equipment across the board as it protects against handguns, knives and spikes, and impact from blunt objects.

Two major concerns identified by the Chichester Street company were heat stress and weight; the harnesses incorporate a heat-change material in its lining, to help dissipate heat away from the dog’s body, which was originally designed for use in space suits.

The armour panels have been contoured to allow the dogs to move and perform as required, giving the best protection possible without being too heavy.

Craig Mills, managing director, said: “We are very proud of the selection of canine harnesses we have on offer; there is something for all types of working dog and we are thrilled to be involved in the introduction of canine body armour as standard police equipment.

“We are sure this is something that will continue to grow, particularly as one of our main advantages is being adaptable to customer needs.”

“Our dogs carry out a vital role in supporting frontline policing and are an important part of our policing family. They are often the first to run towards a potential threat and can be at risk of being harmed. Sadly, we have experienced how it can affect the force when a dog is injured during the line of duty and it means a lot that we are able to equip our dogs with these protective vests to help prevent them from harm.

“Dog welfare is one of my top priorities as NPCC lead for police dogs and I want to ensure that we continue to protect our animals, as much as we protect our officers.”

The move also comes after Finn’s Law – the Animal Welfare (Service Animals) Bill – was introduced in 2019 after a police dog suffered a stab wound to his head and chest as he protected his handler from a man carrying a knife during a robbery in Stevenage, Hertfordshire, in 2016.

Finn’s Law makes it harder for those who harm service animals to claim it was an act of self-defence, rather than be treated as criminal damage.

Following the passing of Finn’s Law, some police forces started to investigate the use of canine armour and a couple of enquiries from this led to the first order for Defence Composites.