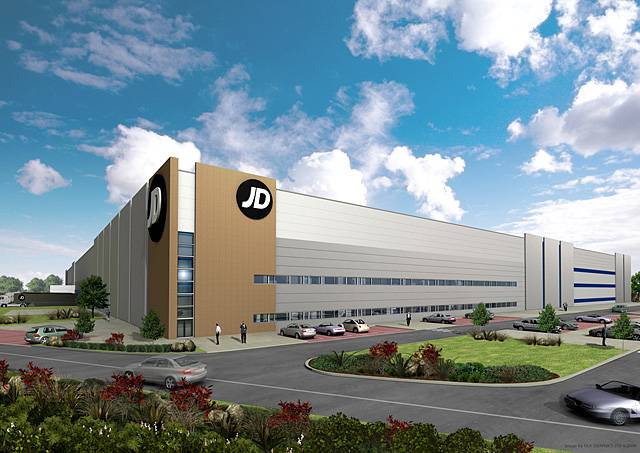 High street retailer JD Sports is to move to a purpose built 616,000 sq ft distribution centre on Rochdale’s flagship Kingsway Business Park, in one of the most high profile deals the region has seen in the last decade.

Wilson Bowden Developments will build the 616,000 sq ft warehouse with 250,000sq ft of mezzanine space for storage, which will be one of the largest warehouses to be developed in the North West in 10 years. Detailed planning consent for the development was granted in January 2009.

The scheme represents a major expansion of the JD Sports distribution operation in the North West and will help secure existing jobs in the borough, as well as offering the potential of significant new job opportunities. JD Sports have not yet announced their detailed plans but these discussions will take place during the construction of this major facility which is expected to commence on site within the next couple of months.

The deal represents another strong vote of confidence in Kingsway from another major investor, following on from the deal to develop the 70,000 sq ft European headquarters of US based company CR Laurence which was secured late last year. That building is scheduled for completion in June this year.

Roger Ellis, Chief Executive of Rochdale Council, said : “This deal is good news for Kingsway Business Park and for the whole of Rochdale Borough. Kingsway has enabled the borough to retain an important company and offer them an attractive location to grow their business”.

John Hudson, Chief Executive of Rochdale Development Agency said: “This represents one of the largest property deals in the North West this year and underlines the attractions of Kingsway Business Park as a destination of choice for quality businesses.

“J D Sports examined a whole range of sites and concluded that Kingsway offers them tremendous business advantages and efficiencies over the long term. We look forward to working with the company to maximize the local benefits of this major investment”.

Kingsway Business Park, at 420 acres, is equivalent to 180 football pitches and is half the size of Manchester city centre. Located directly next to Junction 21 of the M62, the park offers an excellent strategic location for national and international firms with the added benefit of significant grants for qualifying companies. Future plans include a dedicated stop on the new Metrolink and a new commercial zone containing shops, offices and a hotel to serve businesses and their employees on the Business Park.