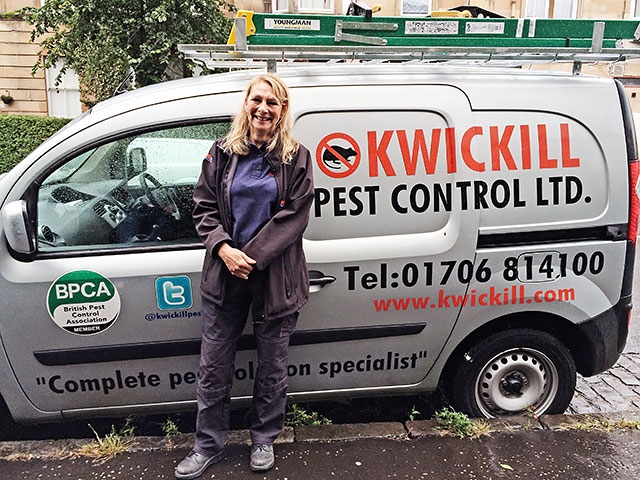 Janet Dixon, a female pest controller from Milnrow, will be starring in a new BBC2 documentary that will follow pest control businesses as they visit homes and businesses across the country to help with their infestations.

Janet, who is from pest control company Kwickill, has been working in the pest control business for 28 years and was approached by KEO films a few years ago about the idea of the documentary.

She said: “The whole show came about because my son Tim tweeted that he thought he had been working with the longest serving pest control lady. Local and pest control news got involved and covered the story. Then KEO Films got in touch to say they want to make a show involving us.”

‘The Ladykillers’ (working title) is currently being filmed and is following Janet along with three other female pest controllers from across the country as they tackle infestations.

“When I was approached about the show I told them that I didn’t want to do anything that was like ‘Life of Grime’ because that isn’t what this industry is about. It is about prevention. I was then told it would be a show about female pest controllers and that is something I was interested in. The show will follow me around as I do my work and will talk about my job and what it involves,” said Janet.

Using high-tech cameras and equipment, the series will show the pests as they have never been seen before, from bed-bugs to rats, from wasps to foxes, and the ‘Ladykillers’ will offer advice on how to get rid of them.

Paul Durgan, Series Producer from KEO Films, said: “The traditional image of the pest controller as the rat catcher in a flat cap is pretty outdated so it was fantastic to find these brilliant women, who are successful and knowledgeable in the field of pest control.

“It will be great watching them in action as they help to improve the lives of distressed people at their wit’s end with pests.”

Now that filming has begun, it is hoped that the show will be aired towards the end of the year or earlier next year at 8pm on BBC2.

Janet added: “I was a bit nervous about the filming at first but then one of the producers told me that once we got going, I wouldn’t notice the cameras were there and that is true. I’m really enjoying it now.”

Once the show is aired, Janet hopes that it encourages more women into the pest control business.