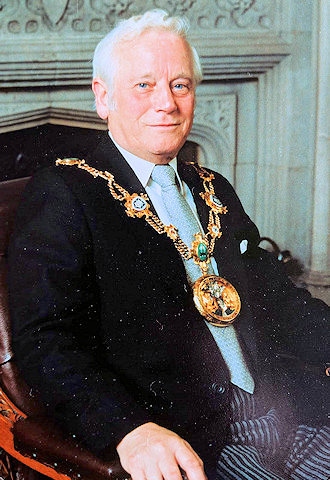 Former Mayor of Rochdale Norman Angus has died on 21 August after battling a serious illness.

Joseph Norman Angus was born on 8 August 1924 in Spennymore to a family of miners and had five brothers and three sisters.

His brother, aged 15, was killed in a pit accident, and soon after, the family moved to Littleborough.

Norman served as a signal man in the Royal Navy during the second world war and was a lifelong member of the Royal British Legion. He laid a wreath at the cenotaph in Littleborough every year for 45 years.

Norman became Mayor of Rochdale in 1984/1985 and set up the Littleborough Nursing Association with Monica Wilde in 1975.

Norman also helped acquire the land at Springhill to build a hospice in 1983 and then set up the charity for the Rochdale Hospice Appeal as his chosen charity. He was the first Mayor to do this and others followed.

Norman and his wife, Thelma, were great fundraisers for the appeal and held many events with an army of friends.  At the time, they raised £40,000 for Springhill Hospice, equivalent to £230,000 today.

Aged 94, Norman recently developed a serious illness, requiring end of life care. The hospice at home staff took care of him along with staff at Cleggsworth House Care Home, plus district nurses and doctors of Littleborough Medical Practice, for which the family are extremely grateful.

Daughter Beverley said: “Without the dedication and foresight of Norman and Thelma, the hospice may not exist today. However, it is due to the generosity of the people of Rochdale that Springhill continues today.

“We hope the people of Rochdale continue to support Springhill so that those who are very poorly can die with dignity in such a wonderful calm and caring place.

“Thank you to everyone over the years who have raised funds and donated to this very worthwhile cause.”

Councillor Allen Brett, leader of the council, who knew Norman whilst he was on the council, said: “I was really sorry to hear of Norman’s death. He served the borough with considerable distinction throughout his mayoral year and our thoughts are with his family and friends at this sad time.”

Tuesday 4 September at St Barnabas, Shore at 1.15pm, then the Funeral procession to pause outside Rochdale Town Hall at 2.00pm and then on to the Crematorium for 2.20pm.

Donations in memory of Norman Angus to:

Given via Holdens Funeral Directors Littleborough.

Many thanks for all the lovely messages and memories they have been so comforting to all our family.