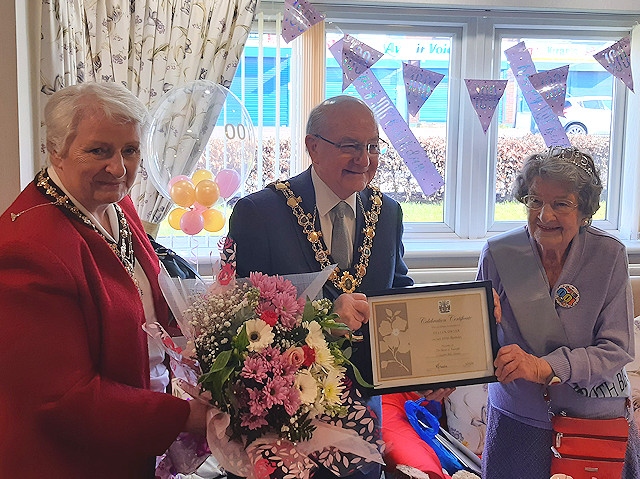 Helen Dwyer celebrated her 100th birthday on Friday 6 March with the Mayor and Mayoress of Rochdale.

At the age of 14, she started work in a confectioner before working at the Co-op bakery.

Attendees enjoyed a buffet and entertainment by Ged and Maggie Morgan, followed by kind words from Sharon Isherwood, the scheme manager at Margaret Ward Court.

Councillor Billy Sheerin, the Mayor of Rochdale, and his wife Mayoress Lynn Sheerin, presented Helen with a signed citation celebrating the occasion. Mayor Sheerin also gave a speech reminiscing of the many times in the past that he and Helen had enjoyed together, especially at the Catholic Theatre Guild concert party where Helen used to sing and the mayor would provide the comedy.

On Sunday 8 March, a special mass was held in honour of Helen where she was presented with a Papal Blessing [a blessing imparted by the Pope] from Rome. Helen is a devout Catholic and she still attends St John the Baptist Church in Rochdale.

Sharon Isherwood, scheme manager at Margaret Ward Court, said: “Helen is one of the nicest ladies I have ever had the good fortune to meet; she is loved by many.

“It was so nice that so many people helped make her birthday special.”