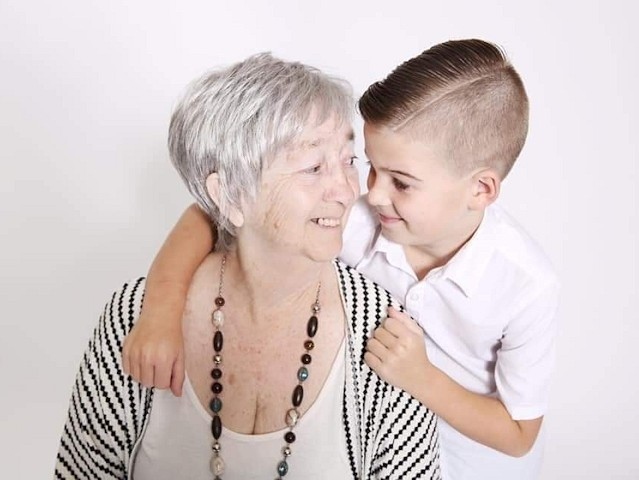 Tributes have been paid to local community volunteer, Linda Phillips, who has sadly died after illness at the age of 73.

Linda had recently been diagnosed with lung cancer, which she was battling against successfully, before unfortunately contracting Covid-19, despite self-isolating. She sadly died in the early hours of Tuesday 14 April 2020.

One of several children, Linda was born in Manchester on 14 August 1946 and moved to Rochdale in the early 1980s, living on a brand-new estate with a fresh start.

She had held many occupations from nannying to working on a cleft lip and palette hospital ward to housekeeping for a local family.

A dedicated mother, Linda also went on to foster over one hundred children over the years, with the family keeping in contact with those she had fostered.

Her voluntary work was a huge part of her life, helping causes both local to Rochdale and international, such as: the Rochdale Foodbank, Parents Against Grooming UK and Shatterboys.

Accompanied by her children, Linda also visited many countries around the world like India, Kenya, The Gambia, Mexico and the Dominican Republic, taking suitcases filled with supplies for those less fortunate, such as toothbrushes, toothpaste, clothing, school items and many more essentials.

Preferring to donate directly to causes, Linda had also been known to pay for school and an education for those in poorer countries, and helped build an orphanage.

She also played a huge role in community groups and was the first community moderator on the Rochdale Online message board which ran until 2012.

Her youngest daughter Charlotte said: “My mum was one of the funniest people I’ve ever met. She was caring and nurturing. I honestly don’t know of any child who had a better childhood than me. I wouldn’t change a single thing, and if I can be half the mother to my boys that my mum was to me, I’ll die happy.

“As a small child, I remember constantly travelling the globe, delivering funds and aid. I was a very lucky child. Every time we covered another country in geography at school, mum would take me there for a ‘field trip’. She used to say, ‘is there any better way to learn about a country than visiting it?’

“Mum lived for her kids and, more so, her grandkids. She has always gone above and beyond to do school runs, football training, rugby training, and swimming lessons. She made sure she was involved with every event, to being included on my eldest’s school photos, and being there on my youngest’s first day of nursery.

“Mum was famous for her pies; she made a wicked cheese and onion pie which everyone said was the nicest they had tasted. Mum did video herself making her special pies and sent the videos to me so I could one day make it myself and reminisce.

“She would never have seen anyone hungry: she would cook extra and feed friends of mine or siblings. She would also batch cook and feed the neighbours.

“Mum was a very strong and passionate woman, and nothing ever fazed her. If something wasn’t right, she would fight it and defend herself until it was sorted: she was fearless. Mum always had a brave face on; I don’t recall ever having seen her scared.

“Two days after mum passed, I received a package with a small wooden heart-shaped wall plaque with the words, ‘goodbyes are not forever, goodbyes are not the end, it simply means I’ll miss you, until we meet again’. I had no idea where it came from, until I noticed it said until WE meet again. I checked mum’s bank and she had bought it two days before she died.

“I’m so sad my youngest only had her for two years, but I’m heartbroken I only had my mum for 28 years. My boys will never forget her, and neither will I. I was not prepared for the hurt and pain of losing her.

“My world fell apart when mum was diagnosed with cancer. I naïvely thought she would be a miracle case where she defied doctors and lived longer, but that wasn’t to be. She fought and fought, winning until Covid-19 hit.

“I’ve never felt a pain like I’m feeling now, but I do take comfort in knowing she’s no longer in any pain. I’ll miss her tremendously and life will never be the same without her. Mum was 45 when she had me; she wanted ‘one last try for one last baby’ and we were the best of friends.

“I feel cheated only having 28 years with her, but they were the best, fulfilling and fun years which I wouldn’t swap for anything.”

Linda's friend, Jean Ashworth, said: "Linda was an amazing lady and wonderful friend for over 25 years, we went on many campaigns and marches together to Save Our Hospital.

“One of the most memorable was when Rochdale Online had the forum and the laughs we had on there with Pete Hinchliffe (aka Aqua): we had everyone in stitches and had many fantastic nights out with Rochdale Online forum members.

“Linda was always a born fighter for people’s rights and will be truly missed."

Friend William Howarth, who founded Parents Against Grooming UK, where Linda was a volunteer, said: “Rochdale’s ‘Iron Lady’ will be greatly missed by all, including all of us at PAG UK. The many children she fostered and survivors she has helped are all indebted to Linda and her empathy for children.”

Linda’s funeral will take place at Rochdale Crematorium at 1pm on 1 May. Immediate family will be present.

Anyone wishing to pay respects is invited to line the streets whilst observing social distancing guidelines, following a route from Steps Meadow and Oakcliffe Road in Wardle to the crematorium.

Funeral enquiries should be directed to Kilpatrick’s Funeralcare, Littleborough: 01706 374461.