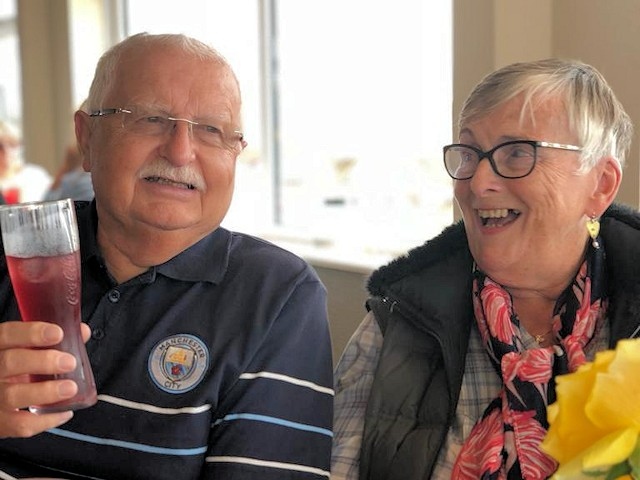 When they met, Geoff was 17 and studying at Rochdale Grammar School for Boys, whilst Carol, then 16, was working as a trainee hairdresser at Elizabeth Marsh Salon on Manchester Road, Rochdale.

Both only children, Geoff was born in Lytham St Anne’s in September 1938, and Carol was born in December 1939 in Manchester.

It was instant attraction after they met in 1955 at a Saturday night dance at Rochdale town hall.

That fateful night, Carol and two of her friends all danced with Geoff, who thought Carol was “the best catch”.

Geoff landed a job as a trainee accountant at Rochdale Council, progressing through the ranks before transferring to Bury Council as Assistant Director of Finance. Carol worked as a hairdresser before having children, and returned to open her own salon in Norden, where they have lived since 1970.

The couple married in 1960 and went on to have three children, Kath, Richard and Duncan, who respectively live in Australia, Bangkok and the UK, and eight grandchildren: George and Ted, who live in Australia; Teema, who lives in Bangkok; and Jack, Oliver, Jonty, Felicity and Theo, who live in the UK.

Carol and Geoff are both very active members of St Paul’s Church in Norden: Geoff was treasurer for over 44 years until 2019, and was a member of the church choir for 66 years, whilst Carol is part of a women’s walking group.

Geoff, an avid Manchester City fan who has had a season ticket for over 30 years, said the secret to their happy marriage is “having lots of patience” whilst Carol says it’s down to being “tolerant of each other’s faults”.

Both are very proud to have been together for so long.

Youngest son Duncan has arranged for the happy couple to receive a telegram from the Queen, congratulating them on such a momentous milestone.

Their children, Kath, Richard and Duncan, said: “Although many things change in life, people come and people go. But the one constant in our lives has been our mum and dad, together as a unit: always there to give honest and practical advice, always reliable and, above all else, always kind and generous with their time and money.

“We could not have achieved the success, nor been the people we are and have raised eight children without their help, support and love.”