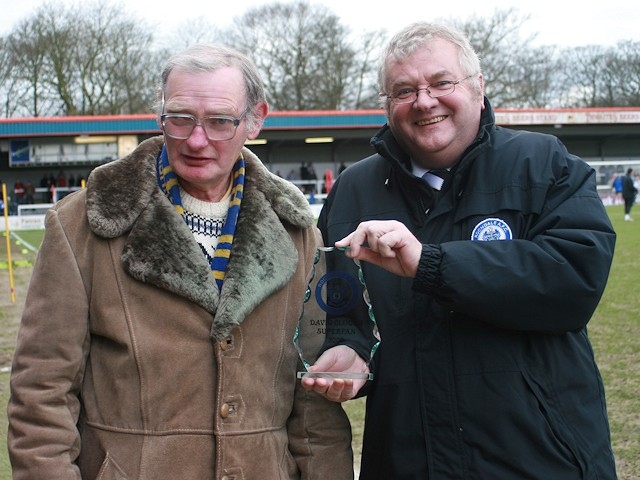 Life-long Dale fan, David Clough, or Cloughie as he was more commonly known, died earlier this week (24 June 2020) after a long illness.

David was named as a Rochdale ‘superfan’ in 2008, in recognition of the funds he generated for the club.

It is estimated that he raised more than £400k over more than 20 years.

Rochdale Football Club has paid tribute to "the remarkable David Clough" in a statement published yesterday.

In the statement, the club said that David began fundraising for Rochdale AFC in 1992 when he started selling over 200 scratch cards a week at his workplace, Whittles Bakery in Littleborough.

He then started collecting the-then new weekly draw, Goldbond, and within a couple of years was collecting from around 800 members whilst selling 400 scratch cards per week, plus hundreds of Christmas Draw and Grand National Draw tickets.

David didn’t drive, so did everything by bike and on foot. He lived at the beginning of Todmorden Road, but went as far as Wardle, Smithy Bridge, and Summit to raise money for the club, following his retirement from Whittles Bakery.

David Bottomley, chief executive of Rochdale AFC said: "David in many ways was typical of the amazing supporters that Dale attract, loyal to the core, great sense of understanding of where the club was in the history of football, long suffering and non-complaining, but actually he was more than just an amazing supporter, he was a man who gave his time selflessly to the benefit of the club, over and over again.

"It’s not an exaggeration to say that the contribution made by David is equal to any legend player or manager or official of the club, he was unique and sadly we may never see his like again.

"May he rest in peace and may he be always remembered for what he gave to our beloved football club. We will as a club endeavour to find a way to truly reflect his memory."

Rochdale AFC programme editor Mark Wilbraham (and a customer on David’s Goldbond round) interviewed David in 2008.

Mark said: “Whatever the day, time or weather conditions, you would see David pedalling around the streets of Littleborough, often putting the life of himself and his bikes in danger as he veered across the road after spotting someone who owed him 50p.

“A vintage video of 1980s Littleborough once popped up on Facebook and David was on it, unsurprisingly knocking on someone’s door as he collected what would have been their pools money.

“In April 2008 I had the pleasure of interviewing David for Dale’s match programme for the play-off semi-final against Darlington.”

Mark has given us permission to republish part of that interview here.

“My mum was a typical red head; she had a really bad temper and one day I must have been getting on her nerves.

“She shouted to my dad: “Take him out of my b****y sight,” so dad decided he’d keep me entertained at Spotland.

“I couldn’t tell you who Dale were playing, but I do know I was hooked and couldn’t wait to go again.”

David was known around Littleborough as ‘Coupon Man’, but that later morphed into Dale’s biggest Goldbond collector.

“A bloke who worked with me at Whittles Bakery, Dave Jenkins, had heard from his nephew that the club were looking for someone to sell scratchcards and collect Goldbond money in Littleborough,” he said.

“I said I’d give it a go at work and did really well, so I went back to the club and asked for more. I managed to get rid of all them as well and before I knew it, my round was massive and had me traipsing all over Littleborough.

“I had been collecting pools money for three years, so I was already out and about, but the Goldbond meant I was out for longer.

“It was all for the club, though, and I got to meet loads of people, so it was very worthwhile. And it’s funny really, as I now collect from the new houses that have been built where the bakery once was!”

David’s work for the club saw him have close links with the commercial departments and its staff, but he also had a unique friendship with arguably the club’s greatest ever player, Reg Jenkins.

“When Reg first came to Rochdale from Devon he was lodging with a couple up Wardle,” David recalled.

“The couple moved house a few years later and came to live on the same street as me in Littleborough. Reg used to visit them quite a lot, so I made a point of introducing myself and we became good friends.

“When we had the Centenary Dinner at the Town Hall in 2007, Reg’s wife, Norma, remembered me and flung her arms around me like I was a long-lost cousin. It was very emotional.”

Mark said: “Reg Jenkins, of course, passed away seven years ago, so hopefully him and David have now been reunited. I imagine the first thing Cloughie will say to him is, ‘I’ve just come to tell you that your goalscoring record’s still intact.’”

Former club employee Richard Wild said: “David devoted his entire life to helping others. Along with his dear wife Dorothy, they fostered children and gave several youngsters a great start in life.

“I got to know David 25 years ago through his support of fundraising activities for his beloved Rochdale AFC. We remained friends ever since, and his loss will be felt deeply by everybody in my household. We were regular visitors to Mona Cliffe Care Home in his latter years, my children becoming friends with many of the staff and residents.

“His generosity will mean his favourite football club will benefit hugely from his estate, and the people who held him close to their hearts, will ensure his money is spent wisely and in a way that he would be proud of.

“David's funeral will be held at 11.50am on Thursday 2 July at Rochdale Crematorium. Dale fans are welcome to attend but will need to respect social distancing and listen to the service outside. It would be great to see people there, he was a club legend and deserves a special send off so it would be fantastic to see friends and fans in attendance. The wearing of club colours is welcomed as we bid farewell to an icon."