You are Here: Home » News » Advertorials » Rochdale AFC want the town to get behind the team

Rochdale AFC want the town to get behind the team 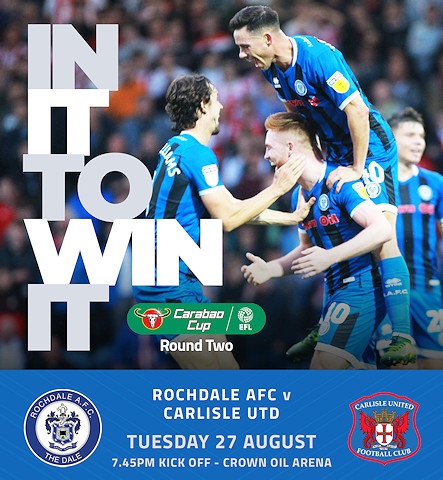 Tickets are being discounted for the game, with kids for a quid

The Dale are calling on fans to get behind the lads on Tuesday night as they take on Carlisle in the Second Round of the Carabao Cup.

Tickets are being discounted for the game, with kids for a quid, and Chief Executive David Bottomley wants the town to get behind the team and enjoy the fantastic football currently being played.

He said: “This is the first time in many years Rochdale have drawn a home tie in the second round of this competition. We want the people of Rochdale to come down to the Crown Oil Arena and support the team to a victory on Tuesday night and potentially draw a big tie in the next round.”

Under new Manager Brian Barry Murphy, Rochdale has enjoyed a flying start to the season, with just one defeat in five games played.

Tickets for Tuesday night’s game are priced as follows:

Tickets can be purchased online at: www.rafctickets.co.uk, in person at the Ticket Office at the Crown Oil Arena, over the phone on Tel: 01706 644 648 or fans can pay on the gate on match day.