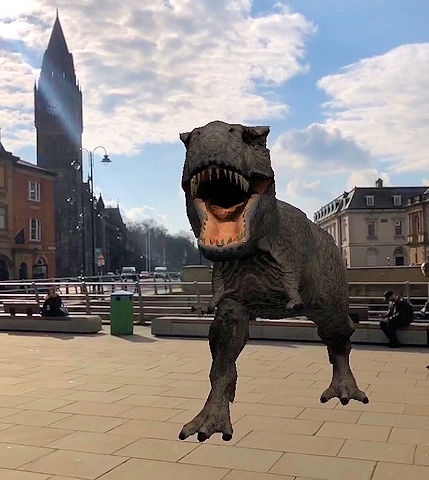 DinoDale: bring an augmented reality T-Rex to life right before your very eyes

With the arrival of Dippy the dinosaur, venturing around the UK for the first time, Rochdale BID has put together a programme like no other: DinoDale, an exciting five-month adventure with an accompanying guide.

Dippy has attracted over 85,000 people to town so far, our bars and restaurants have been at capacity and we are attracting positive attention like never before.

DinoDale is compiled of a map of the key areas around Rochdale, celebrating our town centre whilst absorbing our magnificent architecture. The DinoDale guide is available from participating venues and will be available on a permanent basis outside the BID office in the Wheatsheaf Shopping Centre (or the huge T-Rex head, as it is now known!). 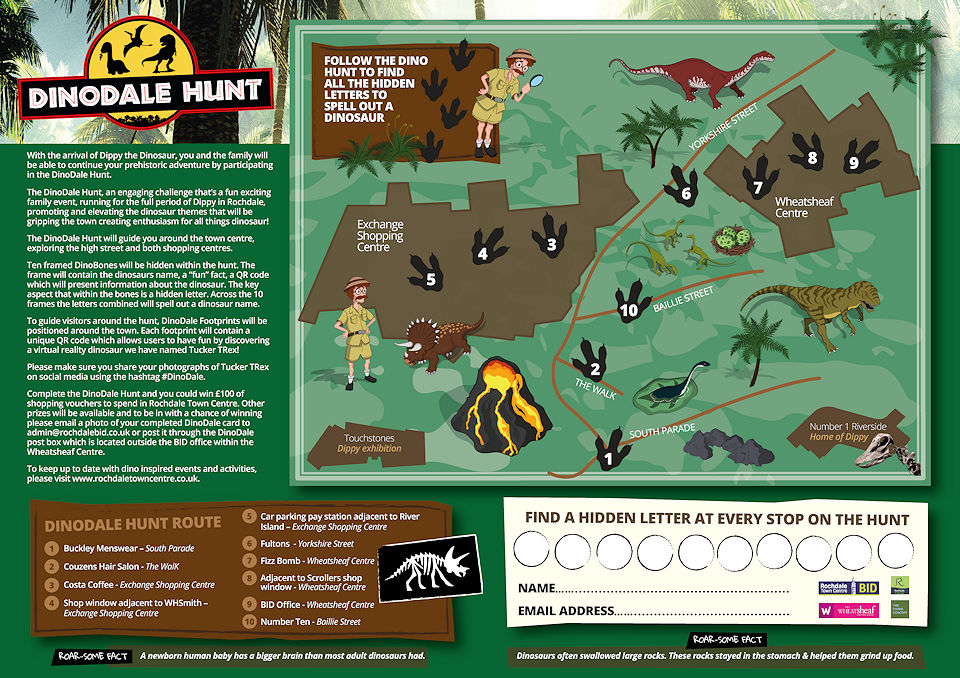 The frames will also contain a QR code, where budding explorers can use their smart phones to find out more about the encased dinosaur. The letters found can then be written onto the map, spelling out the name of a dinosaur.

Entries can be posted in the Dino post box outside the BID office in the Wheatsheaf or emailed to:

While you’re there, there are three very special dinosaur visitors in the Wheatsheaf. See for yourself but be careful, as one will roar back!

Transformed to the DinoDale coffee trail, participants can now own their very own DinoDale reusable coffee cup after completion, created from recycled plastic.

Local schools have been invited to take part in a dino-egg competition where they can create and design their own dino-egg that will be proudly displayed in a jungle setting with a prize for the winning egg.

With a new love for all things dinosaur, special children’s themed menus at venues like the Medicine Tap, Bombay Brew and the Flying Horse cater for everybody, whether your little one is a carnivorous T-Rex, or a herbivore like Dippy.

DinoDale is in partnership with The Paper Concept, a Rochdale-based plastics alternative company which has been involved in the borough’s first plastic-free festival (Street Eat 2019) and works alongside the BID to ensure all their projects follow innovative and exclusive new ways of reducing plastic.

Jayne May, project executive of Rochdale BID, said: “Working alongside Arron [Dixon] and his company has been both an eye-opener and a revelation. Here at the BID, we are determined to do our bit to protect our environment and reduce our plastic consumption, with our ultimate goal to completely remove our single-use plastic consumption from all our events and projects.”

With this in mind, the Dino Hunt will be accompanied by new dinosaur footprints, created from a non-slip aluminium-based material, revolutionising wayfinding in a manner which is both environmentally conscious and eye-catching. These footprints will also have a QR code that will allow the user to bring an augmented reality T-Rex to life right before their eyes!

Paul Ambrose, BID manager, added: “With the arrival of more than 85,000 new visitors into the town over four weeks, we are keen to showcase what Rochdale has to offer, from its established bars and restaurants, to its new businesses around town.

“Having had visitors from as far as South Africa, we now have the world’s eyes on us, and we want to do it right. DinoDale is about engaging and supporting local business: it’s about showcasing our town centre, and – most importantly – it’s about showing everybody that Rochdale’s strong community is a welcoming and vibrant one.

DinoDale is launched this week and will continue to run over the next five months.

The BID invites any feedback or any suggestions to #dinodale

Our alert system will notify you by email when a job matching your requirements is added to our database. Click here to complete the form.
Local Election 2021