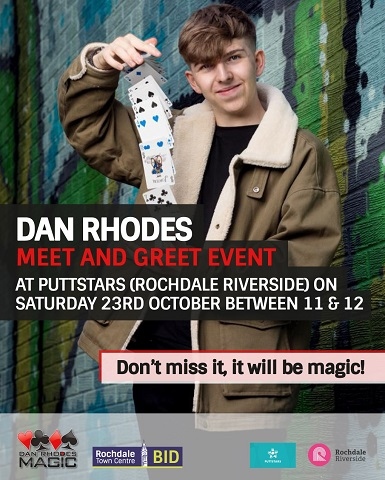 Local residents have the exclusive opportunity to meet the UK’s top magician – and homegrown star – Dan Rhodes right here in Rochdale with a special meet and greet event this month.

Some of you may recognise the 18-year-old from Britain’s Got Talent, when he wowed judges after sawing judge Amanda Holden in half before ‘stapling’ her back together – and some may recall his earlier silver screen performance from children’s talent show Little Big Shots as ‘Dan Dan the Magic Man’.

He even made his debut to American audiences when he was just 13, performing a selection of magic tricks on Little Big Shots USA.

Dan’s love of magic began when he was just six years old after he was given a basic magic kit for Christmas – and he hasn’t stopped showcasing his tricks on people since!

Since his Britain’s Got Talent appearance, Dan, of Milnrow, has become the UK’s fastest growing YouTuber as the self-taught magician has a combined following of over 12 million subscribers and more than 4.5 billion views over hundreds of videos. His success has even led him to grace the cover of the latest issue of Rochdale’s Style magazine and his following expands across the globe.

Now fans and budding magicians alike have the chance to meet Dan in person, and witness some of his most astounding tricks right in front of your very own eyes.

The event is free and no tickets are required.

Meet Dan Rhodes at Puttstars, Rochdale Riverside, Saturday 23 October between 11am and 12 noon.