Council leader in 'extraordinary outburst' after being caught parking illegally 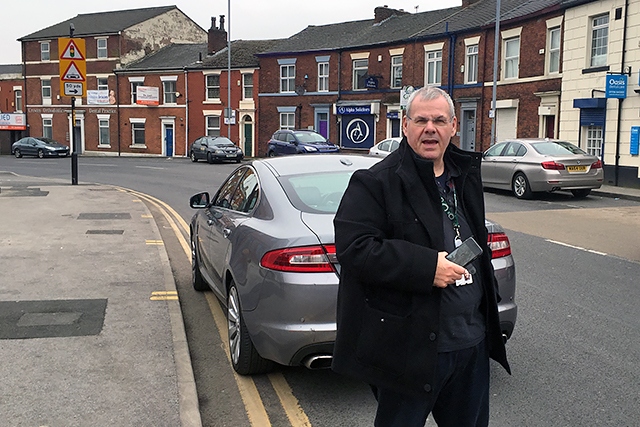 Councillor Richard Farnell, the leader of Rochdale Borough Council, has publicly called one person who pointed out he was parked illegally a "plonker" and another a "turd".

Councillor Farnell was caught parking his Jaguar on double yellow lines on Drake Street. When challenged, in a post on Twitter he pointed out that he is a blue badge holder. However, he also called his challenger, Paul Mitchell, a "plonker". Mr Mitchell was furious at the Council leader's "abuse", he said: "How dare the leader of the Council abuse me for pointing out the error of his ways. It is for Rochdale Council to enforce parking restrictions yet its own leader hasn't got a clue about the law itself. It's embarrassing."

He added: "I want a personal apology. There is no place in politics for abusing members of the public."

Councillor Farnell subsequently added fuel to the fire with a further "extraordinary outburst". In another post on Twitter he accused David Hennigan - who took the photo of Councillor Farnell illegally parked - of being "a nasty turd trying to cause trouble". Lib Dem Leader in Rochdale, Councillor Andy Kelly said: "He was clearly in contravention of the law and he should be made an example of. If he doesn't face any penalty it will send the wrong message to the people of this Borough.

"It gives me no pleasure to call for this action but there shouldn't be one rule for council leaders and another for everyone else.

"He has been caught, he should apologise and accept any punishment."