You are Here: Home » News » News Headlines » CND calls on local MPs to vote against nuclear weapons of mass destruction 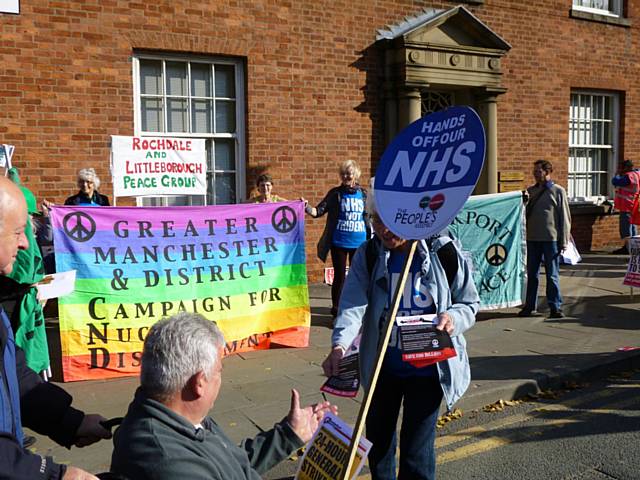 Greater Manchester Campaign for Nuclear Disarmament (CND) has written to all MPs in Greater Manchester following David Cameron's announcement that the government plans to hold a vote on the issue of Trident nuclear weapons system on Monday 18 July 2016.

"Our members in your constituency and throughout Greater Manchester are obviously eager to urge you to use your power as Member of Parliament to promote peace and disarmament rather than to increase the threat of nuclear catastrophe in the world.

“Prominent amongst the many reasons why our country needs to rid itself of Trident nuclear weapons of mass destruction is, of course, the enormous costs involved. We surely cannot afford to squander £billions on Trident when we need money for essential services; for the NHS, for our schools and universities, for decent social care, for housing and for so much else. But there are many other intrinsic reasons why it would be a grave mistake to continue with nuclear weapons.

“Pinning our security on weapons of mass destruction encourages others to do the same. Indeed, instead of protecting us, hosting nuclear weapons makes us a target for the disaffected. And as Britain’s warheads are 8 times more powerful than those dropped on Hiroshima and Nagasaki, any accident would lead to a humanitarian disaster beyond imagination.

“Having nuclear weapons also diverts resources and attention from tackling our most urgent security problems, including climate and environmental destruction.

“Spending ever more £billions on nuclear weapons will also actively deplete the defense’s we need in the 21st century. We need to invest military spending on conflict prevention, on effectively combating terrorism and on preventing cyber-attacks. By moving on from nuclear weapons of mass destruction, we can begin to more effectively serve the needs our country in a changing world.

“As the vote on 18 July approaches we trust that you will seriously consider the case against Trident."