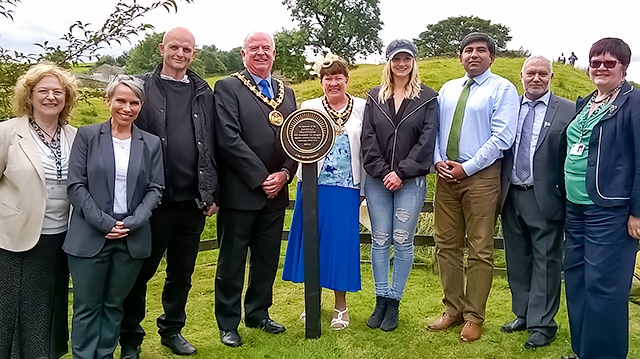 A plaque was unveiled at Catley, Lane Head, Rochdale on Sunday (14 August) to commemorate the work of Rochdale cotton trade workers during the Lancashire cotton famine of 150 years ago.

Many cotton trade workers were left out of work during the cotton famine as it coincided with the American Civil War. They were instead tasked with building roads, such as the Cotton Famine Road at Lane Head, by the local council.

The Mayor and Mayoress, and Councillor Biant, were welcomed by Andy Meek, chairman of the Rooley Moor Neighbourhood Forum, as the plaque unveiling coincided with the forum’s launch event.

Manchester University’s Dr David Brown gave a historical presentation about the support the cotton mill workers gave during the cotton famine to the anti-slavery movement during the American Civil War 1861 – 1865.

Mayor Ray Dutton said: “I am really proud to be unveiling this plaque and to be here with descendants from the cotton mills.”

Councillor Cecile Biant, speaking on behalf of the Leader of Council Richard Farnell, who was absent with illness, added: “Richard would have wanted to be here for this. He is a great believer in Rochdale’s heritage, and this plaque unveiling and remembering the cotton famine is really important to him.

“On his behalf, I welcome you all today. It is really good to see so many people here supporting this and the new Neighbourhood Forum.”

Councillor Biant also read a speech from Richard Cobden, the Rochdale MP from 1859-1865.

There were several clog dancing-related activities, with Alex Fisher, the Littleborough Oakenhoof Folk Arts Group and the Rossendale Clog Heritage Dancers all performing.

A BBC crew filmed the event as it investigates the history of the Lancashire Cotton Famine as part of the new Black History of Britain series due to air in November this year.

The show will investigate the role of Rochdale’s cotton mill workers during the Lancashire cotton famine of the mid-19th century – a depression of the cotton industry, which was partly caused by the American Civil War.