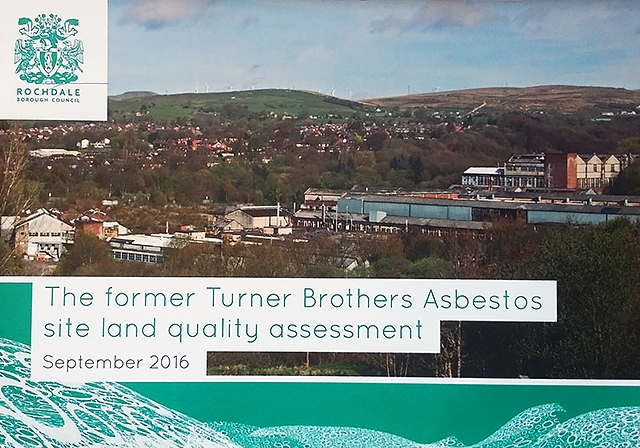 The TBA Project Team is made up of a council officer from Public Health (RMBC), the Contaminated Land Officer (RMBC), the council media team (RMBC), four representatives from RSK (who have been commissioned by the landowner to carry out the investigation), a representative from the Home and Communities Agency and Paul Johnson, representing the landowner, Renshaw Properties Ltd. There are no councillors or residents on the team.

An unpublished report in November 2015 showed that Rochdale Borough Council was initially planning to pay approximately half of the investigation costs. This is now no longer the case as the landowner has decided to fund the entire cost of the investigation.

“We all want to see a sustainable future for the site.”

The brochures cost £250 and the room hire for the meeting cost £60. Ms Rogers confirmed these costs came from the "public’s money".

Projects Director Paul Johnson, who was present at the meeting on behalf of Renshaw Properties Ltd, said: “Currently, we are exploring the site to see what can be done with it, rather than leaving it.”

Mr Johnson, who liaises with the Council about the project, could not provide comment about the landowner’s intentions following the outcome of the survey.

Neil Coyne, Project Manager and Principal of RSK, said: “The proposed plan locations may change but some of the previous testing sites will be still be there. We plan to retest these excavation boreholes to understand current conditions of the site in the same spots.

“We want to get a full picture of the site; there are gaps in the existing history and we want to plug these gaps with results from this investigation.

“The tests we have now provide better detection of substances in the soil and water, and the improved techniques of today will provide more detailed information than previous results.”

A map of the investigation site was available at the meeting and marked locations with tests for each.

The tests include checking slope stability, presence of asbestos in shallow and deep soil, sampling ground water and sampling surface water from the River Spodden where it enters and leaves the site. Dust and fibres in the air are also measured, due to the site’s history.

The geophysical survey of the site is to be undertaken in October, lasting for three weeks.

Rochdale Online has contacted the Council with further questions that arose from residents as a result of the meeting:

No response had been received at the time of publication.