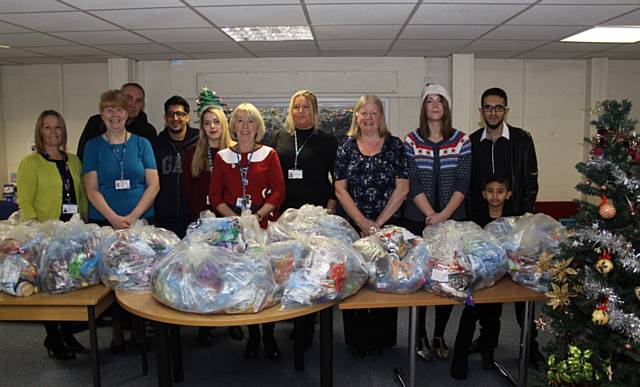 200 gifts for the homeless in Rochdale

Fidelma Genesis, a healthcare worker, has spread some festive cheer around Heywood, Middleton and Rochdale by collecting goody bags to give to the homeless.

Fidelma, Domestic Service Manager with Pennine Care NHS Foundation Trust, was inspired to give something back to her community after noticing people were too busy to help a homeless lady in Manchester.

Fidelma bought her a drink, sandwich and a cake and asked if she could sit with her and have a chat.

Fidelma said: “She was homeless due to her mother passing away and had no family or support. As a result she had a breakdown.

“She said people look at her like she is worthless because they presume all homeless people use drugs. She said she had never taken drugs in her life.

“We chatted for around an hour - about music, about my elderly mum and just general chit chat.

“When I was leaving she thanked me and said that it was like Christmas because I had given her my time.

“It made me realise that homelessness can be circumstances beyond people’s control and we need to lead by example when it comes to helping others.”

Fidelma appealed to the goodwill of her friends, family and colleagues at Pennine Care to donate food and drink items.

Thanks to their generosity Fidelma received enough donations to fill 200 bags, which were individually made up by a team of volunteers.

Half of the goody bags were given to Petrus, a charity which supports the homeless, which gave out the bags with Fidelma’s help on 23 December and on Christmas Day.

The other half was given to Nabz Mustafa, a local man who delivered the bags to those in need over the Christmas period.

Fidelma said: “I am overwhelmed by the amount of kindness from family, friends and work colleagues who have supported me with this cause.

“I will be working with Nabz to continue support the homeless throughout the year, if you are interested in helping out then please get in touch.”