You are Here: Home » News » News Headlines » The Flying Horse CAMRA’s Branch Pub of the Year

The Flying Horse CAMRA’s Branch Pub of the Year 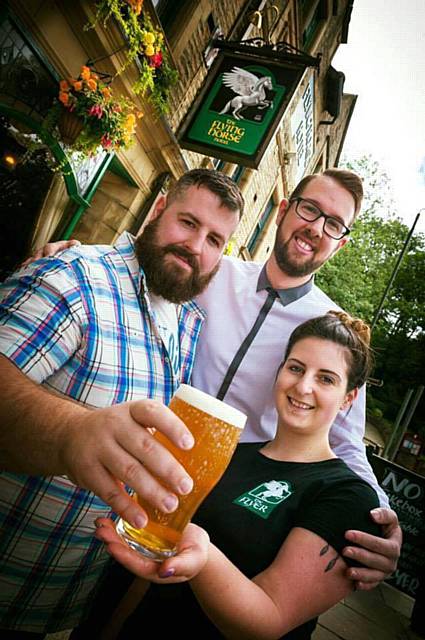 The Flying Horse has been named as CAMRA’s Branch Pub of the Year 2017 for the Rochdale, Oldham and Bury branch.

CAMRA, the Campaign for Real Ale, aims to promote real ales and pubs across the UK. CAMRA was founded in 1971 by a few real ale enthusiasts at a time when traditional rich-flavoured ales, were being replaced by brewers producing beers with less demanding production and storing techniques.

Owner of the Flying Horse Hotel, Ben Boothman, said: “We are absolutely over the moon to be named Rochdale, Oldham and Bury pub of the year. An awful lot of work has gone into improving the range and quality of our beers over the last 12-18 months.

“However, this is a process that started 10 years ago when we only had a choice of two beers. We like to have a mix of local and national ales across our 10 beer pumps. Winning this award in our area is a great accolade when you consider we have an ex-national winner in The Baum and arguably the busiest real ale pub in the world in the Regal Moon so close by.

“Rochdale really is the place to be when it comes to real ale. This award would not have been achievable without the advice and support of CAMRA, and of course our wonderful staff led by manager Jon Hudson.”

The Flying Horse is also celebrating its tenth consecutive year in the Good Beer Guide, a national guide listing good pubs and good beer as recommended by CAMRA.