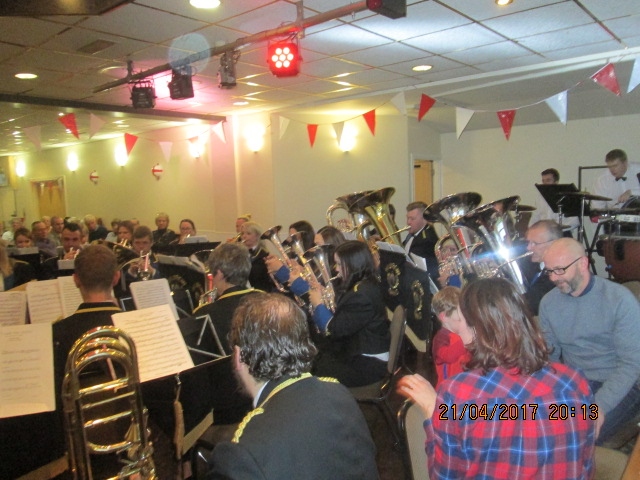 Although a couple of days in advance of St George's Day the concert attracted a capacity audience to Milnrow Cricket Club.

Under the direction of MD Mark Bentham, Milnrow Band treated those present to a well-chosen and well played programme of patriotic musical gems.

As befitting the occasion the band commenced its programme with 'Fanfare and Descant' part of Gordon Jacob's arrangement of 'The National Anthem', originally used at the coronation of Queen Elizabeth in 1953.

The next item was 'Kings Herald', part of Herbert Howells` 'Pageantry', the 2017 Regional Championships test piece on which the band qualified at Blackpool to represent the North West alongside Foden's at the October finals in London

First solo of the evening was 'Lark in the Clear Air'. This traditional item (attributed to the Irish poet Sir Samuel Ferguson 1810- 1886) was softly and expertly caressed by the lovely sweet playing of Jenny Brown on tenor horn. Her touching rendition musically matched so well the original poems wording, when seen in print.

'Dear thoughts are in my mind, and my soul soars enchanted
As I hear the sweet lark sing in the clear air of day.
For a tender beaming smile to my hope has been granted
And tomorrow he shall hear all my fond heart longs to say.'

A Beatles selection followed, it included such well known songs as 'Eleanor Rigby', 'Penny Lane', 'Norwegian Wood' and 'Hey Jude', in which the audience fully participated.

The players put down their instruments to introduce the next item, Radio Head's 'Creep', unusually by way of a 'band chorale' of mixed voices, eventually reverting back to being instrumentalists for the middle section with a final chorale accompaniment to close. 'Creep' would seem to bear a passing resemblance to 'Bohemian Rhapsody'.

Award winning soprano player Chris Musgrave was next to show his expertise, but on the post horn, with his rendition of that old staple 'Post Horn Gallop'. This performance included the sounds of a pack of pursuing hounds as imitated by the rest of the band. Originally composed by German cornet player Herman Koenig, 'Post Horn Gallop' is mostly associated with military bands and in its latest form is used as the entry music when Leicester City take to the football field at Kings Stadium.

The baritone of Adam Snape featured in 'Witches of Westmoreland'. This piece almost defies description, with its fantasy references to witches, hounds, and hawks, reminiscent perhaps of the fable of King Arthur and his Knights.

As a tribute to the late great composer, musician and brass band stalwart Gordon Langford, who recently died, the band played a selection of his famous British marches and concluded the half by playing the medley 'Keep Smiling Through' which included such favourites as 'White Cliffs of Dover', 'Yours', 'Lillie Marlene' and 'We'll Meet Again', made famous by Vera Lynn and very appropriate as she has recently celebrated her 100th birthday.

After the interval, the programme included a couple of items associated with World WarTwo.

A rousing start was provided by the well-known 'Dambusters' March'. Written by Eric Coates, this march was the theme music for the film of the same name, released in 1955.

This was followed by 'Turned Out Nice Again', a medley of songs made famous by North Country comic George Formby. He was born in Wigan in 1904 and died in 1961 he was buried alongside his father in Warrington.

Two of his songs the audience enjoyed participating with were 'Blackpool Rock' and Leaning on a Lamp, the latter with comic drunken cameos by three sober band members.

Final soloist of the evening was Bandsman of the Year Mick Morris, he has had successful spells on solo trombone and solo horn and is at present the bands' excellent solo euphonium player.

Mick chose to play John Hartman's Air Varie on 'Rule Britannia'. He thrilled the audience with his artistry, tone and command of the instrument also with his dexterity of fingers coupled with a very able 'triple tonguing technique'. A well-deserved standing ovation ensued.

To emulate a 'Last Night at the Proms' feel, MD Mark Bentham included several appropriate items in which band and audience wholeheartedly created an 'at the proms atmosphere'.

Preceded by Elgar's lovely 'Nimrod', and Kenneth Alford's march 'The Standard of St George', the band led the assembly of 'joyous flag wavers' in a rousing 'Fantasia on British Sea Songs'. It was arranged by Sir Henry Wood in 1905 to commemorate the battle of Trafalgar and contains a medley of British Sea Songs.

'Jerusalem' (hymn tune), also known as 'and did those feet in ancient times', by William Blake/Sir Hubert Parry, kept up the enthusiastic atmosphere, and the concert ended after Sir Edward Elgar's 'Pomp and Circumstance March number one' (Land of Hope and Glory) and several part repeats as a 'curtain call'.

Ken Watts, band president, said: “After such a high class performance by this Champion Section Band, its recent achievements were highlighted, and by the way the audience responded it is clear that Milnrow Band is appreciated as a top class outfit both in the concert and contesting field.

“The members of Milnrow Band wish to thank their many supporters and Milnrow Cricket Club for their ongoing support.”

Next concert is at Shaw Playhouse on Saturday 13 May.