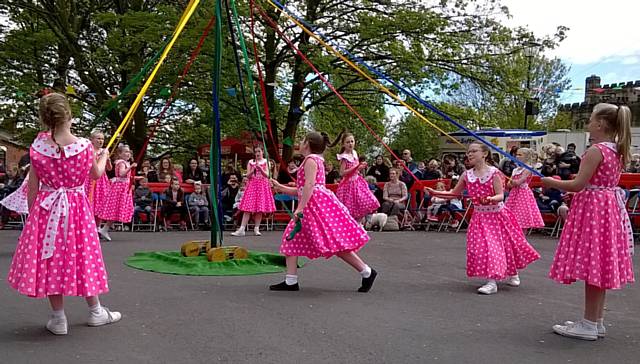 The Middleton May Day celebrations on Monday 1 May, started with St Michael's Brass Band playing in the bandstand in Jubilee Park, followed by the annual parade led by Manchester Morris Men, Mayor Ray Dutton and Liz McInnes MP round Jubilee Park to Saint Leonard's Square.

Parkfield Primary School started the entrainment in the square with a Maypole Dance followed by childrens Entertainer, Zippy JR, and Morris Dancing from Manchester Morris Men.

There was also a children’s fun fair, food charity stalls, and face painter.

The children thoroughly enjoyed Zippy JR, with lots of magic, laughter and ‘its behind you’, there was even a rabbit which one of the children made ‘appear’.

Mayor Ray Dutton said: “It’s great to see so many people here, and a big thank you to all the organisers who put in so much hard work to make the event possible.”

Peter Shore from Middleton Roundtable, who organised the event, said: “The event was very well attended with even the sun making an appearance. It was certainly one of the best May Day events we have put on in recent years.”