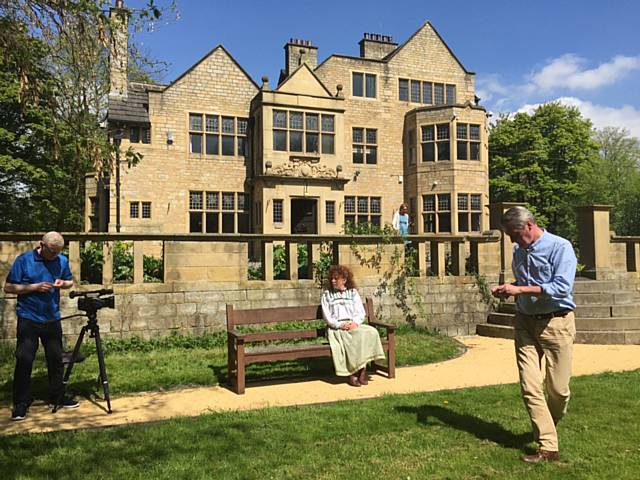 Filming has begun on a new documentary about renowned Middleton architect, Edgar Wood.

There are currently no film records about the heritage and legacy of Middleton-born Edgar Wood (1860-1935).

Created by The Heritage Film Group, who are based at the Grade 1 listed Edgar Wood Centre, the unique and exciting project ‘Edgar Wood- A Painted Veil’ will follow the life and times of Wood.

Filming has already taken place at Wood’s former home, ‘Briarcourt’ in Huddersfield and the famous architect himself will be portrayed by actor Gareth Mason.

Wood was a leading proponent of the Arts and Craft movement and worked on domestic and public buildings in and around Manchester and Yorkshire. His eclectic work bridges the gap between The Pre-Raphaelites and Modernism.

A number of his stunning buildings have already been given a makeover, including Grade II listed Redcroft, his former home on Rochdale Road, where Wood lived until 1916.

His staircase and exedra in Jubilee Park in Middleton is also currently undergoing restoration.

The Heritage Film Group hopes the film will raise local and regional awareness of a figure deserving wider recognition.

Earlier this year, they received a grant of £35,600 from the Heritage Lottery Fund (HLF) towards the documentary project, including advertising and promotion, equipment hire, screening venue hire, filming and editing.

Directed by Anthony Dolan, the film will be shown in a programme of screening events throughout the region and beyond, starting in late 2017.

The screenings will promote input and discussion from a broad audience.

The project will be led by experienced historians and film makers, assisted by volunteers who will gain experience in film making and presentation.

North West Heritage and The Royal Institute of British Architects, and their wider associations, have acknowledged that this is a very special and unique heritage opportunity.

This project would not be possible without the support of the HLF North West and National Lottery Players.

Nathan Lee, Head of HLF North West, said: “We’re pleased to support the Heritage Film Group to create a lasting legacy to an important figure in the heritage of the North West.

"Thanks to National Lottery players, this project will share Edgar Wood’s life and work with a wider audience.”