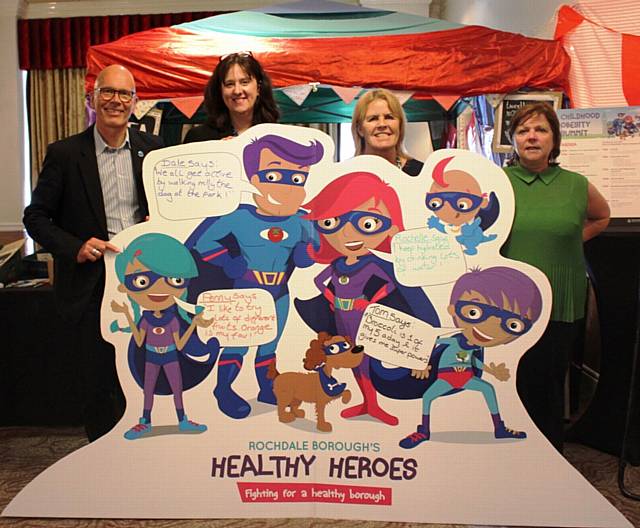 Rochdale Borough Council and its partners have started the fight back to a healthier borough and pledged their commitment to reducing levels of childhood obesity.

Childhood obesity is a significant challenge on a national level with 34.1 per cent of year six children measuring as overweight or obese, which if not tackled could lead to serious health problems later in life such as type-2 diabetes, heart disease and some cancers.

In the borough of Rochdale 35.5 per cent of year six children are overweight or obese, which is the fifth highest percentage in Greater Manchester; lower than Oldham, Wigan, Salford and Manchester.

The summit, organised in partnership with Cartwheel Arts based in Heywood, consisted of presentations, activities and interactive workshops to help attendees think about the scale of the issue, the barriers, how to overcome them and how to work together to support children and their families.

National speakers; Professor Simon Capewell from the University of Liverpool, Robin Ireland from Food Active and Healthy Stadia and Steve Morton from Public Health England attended the event to give their take on how to tackle obesity at national and local levels.

Attendees at the summit were asked to make pledges on how they as individuals and organisations can contribute towards reducing childhood obesity. Some pledges included; being good role models, promoting healthy breakfasts and encouraging attendance at physical activity sessions.

Councillor Donna Martin, Rochdale Borough Council’s cabinet member for children’s services, said: “Preventing and reducing childhood obesity won’t be achieved by any single agency or group on its own. This is a key public health priority for the council, and while there is already some great work happening across the borough, there are lots of new opportunities we can explore. We really need everyone to work together and take joint responsibility for tackling it by doing their bit toward this really important goal, so it was really great to see so many people coming together at the summit to help our children live healthier and happy lives.”

The event also saw the launch of the new childhood obesity communications campaign the ‘Rochdale Borough’s Healthy Heroes’ a superhero family whose aim is to fight for a healthy borough by sharing nutrition and physical activity advice with children and families. The heroes will be out and about later in the year.

For more information regarding childhood obesity and how to get support visit: