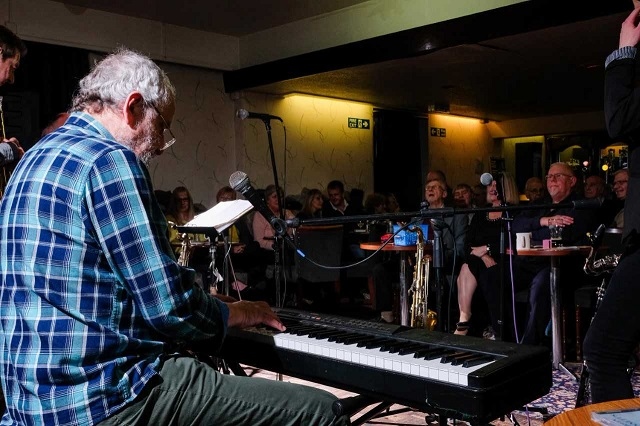 After an absence of around seven or eight years veteran keyboard player Martin Bennett was back at Jazz on a Sunday (JOAS) leading an Old Green River Band lineup comprising Stan Williams on trumpet and flugelhorn, Howard Murray and Alex Clarke on an array of saxophones (and where Alex was concerned clarinet in the singular), together with Howard Worthington on double bass and Bill Buck on drums.

Over the course of three well balanced and thoroughly entertaining sets, in addition to established jazz standards ‘Avalon’, ‘China Boy’, ‘Wabash Blues’, ‘Deed I Do’, ‘Perdido’ and ‘All Of Me’ - the latter "with vocal refrain" from Stan - Swing Era favourites ‘Bei Mir Bist Du Schein’, ‘Undecided’, ‘I Got Rhythm’ and ‘Exactly Like You’ were heard.

With their leader at his gravelly-singing-voiced best, a selection encompassing Folk, Blue Grass, Country Music and Country Rock - ‘Louise’ (Bennett as Howlin Wolf), ’Tennessee Waltz’, ‘Take My Time’ and the compelling, rhythmic ‘Meet Me Somewhere In Your Dreams’ plus a passing nod to Rhythm & Blues purists, courtesy of ‘Kansas City’, together with the nowadays semi-obligatory Elling-tonian element - viz Duke’s ‘Mood Indigo’ and Stan again on vocals with ‘Don’t Get Around Much Anymore’.

Alan Lawless, JOAS said: "It was great to have Martin back again - and that went without saying for another longtime JOAS favourite in Howard Murray, as it did for Stan, Bill and the other Howard.

"Backslapping aside, a special mention has been made of seventeen year old Alex Clarke, who those in the business professing to know about this sort of thing insist could be well on the way to becoming the next Amy Roberts.  Praise indeed.

"As Andre Previn might well have put it (balancing on that bus platform), 'I appeared at Jazz on a Sunday and look what happened to me'."