You are Here: Home » News » News Headlines » ‘Aspling, Girl on the Spectrum’ - Middleton woman speaking out to raise awareness of autism

‘Aspling, Girl on the Spectrum’ - Middleton woman speaking out to raise awareness of autism 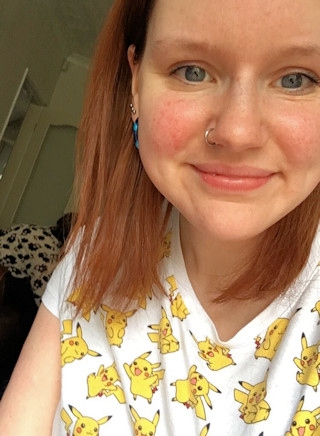 A woman from Middleton is speaking out about her personal experiences with autism to highlight what living with the condition is really like.

Victoria Whiting, 26, was diagnosed approximately around one year ago in early 2017, roughly nine months after her first appointment.

The psychology student, known online as ‘Aspling’, grew up noticing little things that about her behaviour that are classed as ‘typical’ traits of autism.

She explained: “One day I wrote them all down, this list included things like, how my mood was like a thunderstorm, one minute I could be fine, the next I’d be really upset, how I dislike crunchy foods and loud noises – stating that I was scared of the hoover, how I have special and repetitive interests, how I need routine.

“It was traits like this that I identified with, things like my special interests, how I take things literally, my social difficulties. Growing up I felt very different compared to everyone else, I had a small friend group (and still do), my interests were more intense too, I just didn’t fit in with everyone else my age.”

The National Autistic Society states the condition is a lifelong developmental disability that affects how people perceive the world and interact with others. People with autism can have difficulties with every day social communication, social interaction, repetitive behaviours and sensory issues.

As a child, Victoria did not like labels on clothes or the seams on her socks, often kicking up a fuss when she had to go to school, something she says is “mostly because of the sock issue”.

She carried on: “I don’t really remember much from my childhood. However, what I can recall is a few memories. I just used to collect things, I vividly remember collecting My Little Pony figures, I used to keep them in baskets under the sink in the bathroom, I had different colours different sizes, different names, I just liked to play with them.

“As far as I know I ate fruit up to a certain age as well, now I don’t eat any fruit, bananas are the worst, however, I did like to chew all the hands and feet off my Barbie dolls – looking back that could have been a sensory thing.

“I didn’t really enjoy education as I was academically behind compared to my peers, and I only had one proper friend through both primary and secondary school. I didn’t fit in with the people in my class, I stuck out, I was the ‘weird’ one of the group, and that didn’t really bother me.

“In primary school, I had one teacher, Mrs Collins, who used to give me extra support with my handwriting and maths. Her help and support really impacted me and my academic work, she was wonderful, and I don’t think I’d have got this far without her. The same goes for my college tutor Cath, she believed in me and helped me achieve what I thought was impossible.”

When asked about some of the common misconceptions people have about the condition, Victoria  replied: “We are all different, all neuro-diverse, and autism doesn’t have a look – people often tell me I don’t look autistic, and I think, seriously?

“We aren’t stupid, our abilities have a vast range, but on the other hand we aren’t super human.

“Another misconception is we lack empathy, which isn’t always the case, and we are just badly behaved – this is so incorrect. We aren’t naughty, sometimes we are not in control of our emotions.”

As part of her determination to raise awareness of autism, Victoria has since launched a blog, ‘Aspling, Girl on the Spectrum’.

She said: “Before I was even diagnosed I had an interest in autism; since the diagnosis I’ve wanted to help people and show people what it’s like to be autistic.

I set up the blog as a personal thing for my writing, but also a resource for other autistics, parents and professionals.

“My autism affects me in a lot of ways really, on a daily basis I find socialising difficult, I never know what I’m supposed to say, or what people are asking, so it can be quite tricky.

“Social situations can make me really uncomfortable. I find going out difficult, unless I have someone with me, for example my husband or my mum. Most times when I go out I have my headphones with me – one because I like listening to music and two it blocks out the noise and people are less likely to come and talk to me.

“I find food an issue at times too, as I like very few foods, mostly I eat pasta or pizza, very few vegetables, and I don’t eat fruit, so my diet is pretty poor. It also takes me a while to process incoming information, I need extra time to get my head around things.”

Other challenges that can prove overwhelming include ordering food, paying for items in shops and public speaking.

She added: “One of my lecturers, Dr Pedro Vital, he has been fantastic, he has a deeper knowledge and understanding of autism, and I found this so helpful. He has been particularly helpful in that when I’ve done past presentations and I’m asked questions my instant response is 'I don’t know' and he has told me 'you do know, you can do this', and he was right, I did know the answer, sometimes I just need reminding how capable I am. A challenge for me is that I tend to give up, and I constantly needed to be reminded I can do things, Pedro does this.”

Victoria is married to husband Liam, a games design graduate, who is also on the spectrum as he has Asperger’s, a form of autism.

She said: “I think having a partner on the spectrum helps. I think he understands me more than most and on a much more personal level. Honestly, we are just like a regular couple, just a bit quirkier.”

“Liam’s traits do differ from mine in a few ways, to me he is more intelligent, but in fact he is just more patient. I am quite comfortable talking to people on my terms, whereas he isn’t. We’re both very creative and share some common interests, such as music and video games.”

Victoria is determined to achieve success in the future. Academically, she is aiming for a master’s degree, “possibly a PhD”, whilst she hopes to take her blog further.

She said: “I want to be an advocate for autism, and help people gain more of an understanding.

“Being diagnosed was a relief, for me I finally had an answer to why I behaved/functioned the way I do, why I felt so disconnected, it explained all my difficulties. It made sense for me, so I was happy when I was first told. Having an official diagnosis has allowed me to accept myself, accept that I am autistic, and that is part of the reason why I am speaking out about it now. I think it is vital to give people an understanding of autism.

“As a person I was no different, I hadn’t changed, the only difference was I now had a label, a label which I needed to get the support I needed.

"I’ve found that since my diagnosis I’ve made so many great autistic friends, people who understand me on a more personal level, they treat me as a human, but on a deeper level they understand my difficulties too.

“To me though, I am autistic, it is part of me, I am not broken, not missing a piece, this who I am. My brain is wired differently, and I see things from a different perspective.”

'Aspling, Girl on the Spectrum' can be read at: