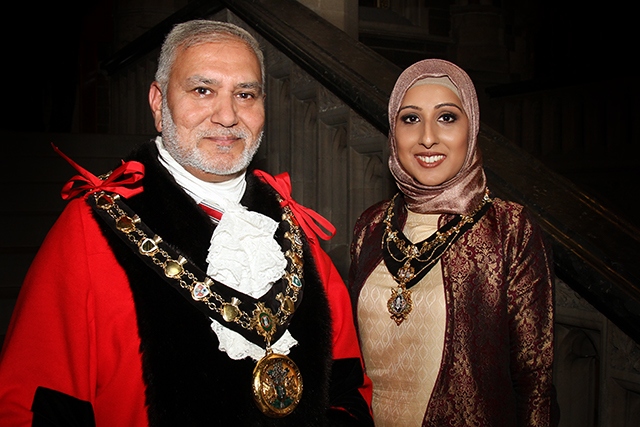 Mohammed Zaman was sworn in as the new Mayor of Rochdale at the annual Mayor Making Ceremony on Tuesday (15 May) evening.

Held at Rochdale Town Hall, attendees included former mayors, MP Tony Lloyd, distinguished guests and councillors who watched in the Great Hall as the departing Mayor, Ian Duckworth, handed the chain over to Councillor Zaman and his daughter, Naaira Zaman, the new Mayoress.

Mayor Zaman said: “This is a great privilege and honour for me and I am very proud to represent this remarkable borough.

“During my mayoral year, I will continue to work hard raising the profile of Rochdale whilst promoting community cohesion, peace, harmony and positive interaction between people of different backgrounds, faiths and cultures.

“I will continue to support, promote and encourage work of community, voluntary organisations and groups and proceed to raise funds for charities.”

Born in Azad Kashmir, Mohammed Zaman arrived in Rochdale in 1975 where he started his first paid job as a labourer at Arrow Mill in Castleton.

A former local government officer, he served as a youth worker in various community organisations within the Rochdale borough.

He also went on to complete a diploma in teaching community languages and gained certificates in bilingual skills, youth and community work, culminating in a postgraduate degree in teaching.

After taking early retirement in 2006, he had a part time teaching role at Hopwood Hall College and helped many individuals from different nationalities gain access to training, employment and progression in their careers.

Mohammed has been a member of the Labour Party since 1984 and following retirement, became councillor for the Milkstone and Deeplish ward in 2011 and in 2015 was re-elected with an increased majority.

He has represented this ward for the past six years and hopes to continue serving the community.

He is married with four sons and four daughters and has seven grandchildren.

Mayoress Naaira Zaman was born in Rochdale and is a former student of Balderstone Technology College. She has worked at Falinge Park High School and holds a BA (Hons) in Politics and Culture from Manchester Metropolitan University. She has worked at Rochdale Borough Council as a policy support officer and as part of the community safety team at Manchester City Council. Naaira has also served on the governing body at Oulder Hill School between 2011 and 2015.

She is married to a GMP officer and has two children.

The Mayor’s charities this year will be:

The new Deputy Mayor of Rochdale is Billy Sheerin, who has represented Labour in the Castleton ward since 2012 and is currently Assistant Cabinet Member for Adult Care.

Billy attended St Gabriel’s RC School and Rochdale Technical College and has been involved in amateur dramatics for over 50 years. He is a long standing member of Rochdale’s Curtain Theatre as a producer and set builder and is on the theatre’s board of trustees.

Also a keen gardener, he helped Rochdale compete in the Township in Bloom competition.

A lifelong Christian, he is the acting chairman of the parish council and a strong believer in working together with Islamic brothers/sisters and minority faiths for the good of the borough.

He said: “This is a great honour and I am really humbled to have this important civic position. I will do my very best to support the work of the Mayor.”

Deputy Mayoress, Lynn Sheerin, was born in Rochdale and met her husband Billy in 1964 at the Rochdale Catholic Theatre Guild. They married in 1966 and have two daughters and a son.

Like Councillor Sheerin, she has a love of the arts and is a member of the Royal Shakespeare Company. 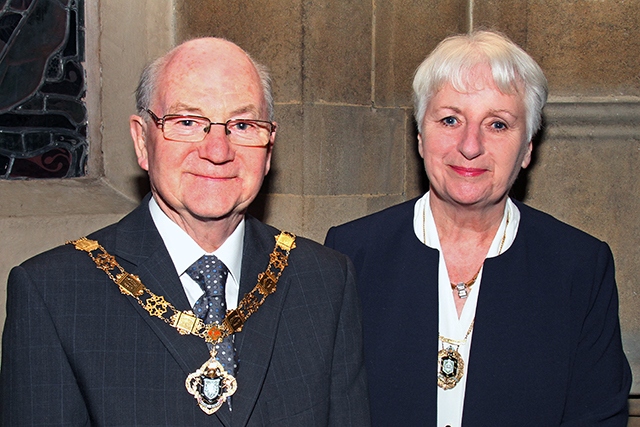 Entertainment at the ceremony was provided by Rochdale Music Service, representatives from the Centre of Wellbeing, Training and Culture who recited a traditional prayer, and Rochdale Borough Youth Brass Band.

Leader of Rochdale council, Councillor Allen Brett, welcomed Councillor Zaman as the Mayor of Rochdale for the next municipal year. Leader of the Conservative party Ashley Dearnley seconded the election, along with Councillors Janet Emsley and Dalaat Ali.

Councillor Brett said: “I think this year will be busier than ever. Thank you Mr Zaman for honouring us as Mayor.”

Retiring Mayor, Councillor Ian Duckworth, who is also retiring from the council, said on his departure: “This has truly been a wonderful year and there are so many things that have happened.

“I wish Councillor Zaman and his Mayoress all the best for the next year as I say a big thank you and goodbye to you all.”