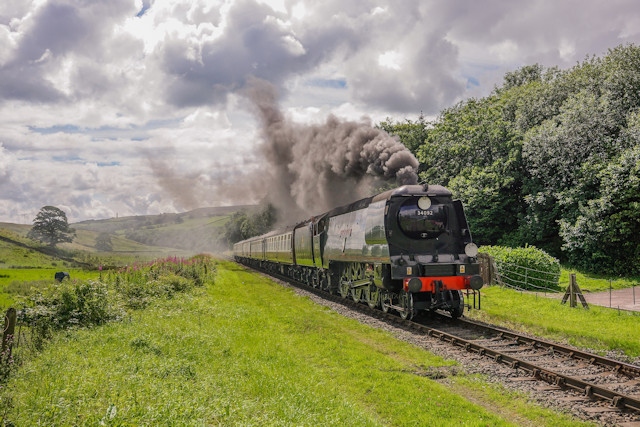 The golden age of steam: The East Lancs railway

Plans to extend the East Lancashire Railway to Castleton are building up a head of steam, with a feasibility study set to be drawn up by Network Rail.

The extension would be a further boost to the heritage line, which is the second most popular tourist attraction in Greater Manchester, attracting almost 190,000 visitors in 2017.

The line, which currently runs from Bury to Heywood, with stops at Ramsbottom and Rawtenstall, is also the third most visited heritage railway in the country, using a range of preserved steam and diesel locomotives to haul vintage train services through the scenic Irwell Valley.

For several years, the Council has had ambitious plans to restore part of the rail line, including the extension of the railway from Heywood to Castleton.

The study builds on work to improve the station in Heywood, which has recently benefitted from a new café and children’s play area, funded by Heywood Township, the railway and section 106 contributions.

The council is also working on improving access to the station by creating a direct link from Manchester Road, so visitors don’t have to cut through a residential area via Green Lane and Station Road.

The feasibility study, commissioned by Rochdale Council, will look at a number of options for the route and timetable, and the likely costs of each proposal. It will take around four months to complete and the council, along with its partners at the East Lancashire Railway (ELR) Trust, will then agree a preferred option before starting to draw up more detailed proposals and possible funding options.

The news comes as an economic impact assessment on the railway, which opened in 1987, found that it supports 219 full time equivalent jobs, up from 112 in 2008, and generated more than £8.3m for the local economy in 2017. Fifty people work on the railway itself, with an additional 780 volunteers.

Councillor Billy Sheerin, Castleton Councillor and Member of the East Lancashire Railway Trust Board, said: “This majestic steam railway is a major attraction, not just in Greater Manchester, but across the North West, and its popularity and success has grown enormously over the last ten years.

“Extending the line to Castleton has long been an ambition of ours, along with our partners at the ELR Trust and Bury and Rossendale Councils, so I’m delighted that it’s taken another step forward. Extending the line to Castleton will provide a direct link to the ELR from the national rail network, boost local business, and further support economic regeneration and tourism along this route.”

Frank Salt, on behalf of the Friends of Castleton Station, commented: "This is great news and credit must be given to the East Lancashire Railway board and trustees for progressing the project. Heritage lines are a proven way of regenerating areas especially historically industrial villages such as Castleton, which have suffered somewhat with the decline of traditional manufacturing.

“It is particularly gratifying to note that Rochdale Council are fully in support and are seeking to raise funds from the developers building new houses around the village. Councillor Sheerin is well known for his support of the station: the floral displays are again magnificent.”

Tracey Parkinson, East Lancashire Railways General Manager, said: "We are excited to review the findings alongside Rochdale Council and review what we can deliver."

Natalie Keaskin, sponsor from Network Rail, said: “We are working with Rochdale Council to undertake a feasibility study to explore options to extend the East Lancashire Railway from Heywood to Castleton.

“The report will look at potential options to bring the heritage railway into Castleton and provide an interchange for passengers and services. This will allow the council to start discussions with stakeholders and potential third-party funders.”