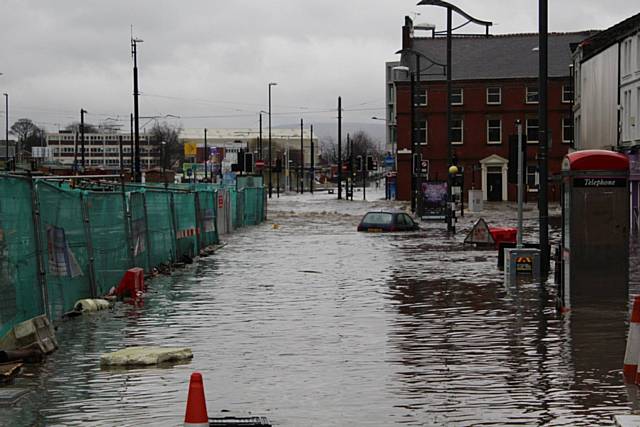 The government has given a major boost to a £46m flood defence scheme to be built in the borough of Rochdale.

DEFRA Minister Therese Coffey today announced £5m funding towards the project, which is one of the largest inland flood defence schemes in the North West.

The scheme will involve building a series of storage reservoirs along the River Roch and its tributaries from Littleborough to Rochdale town centre. A number of flood alleviation measures, like raised walls and improvements to culverts and bridges, are also planned for Green Vale Brook, Town House Brook, Ealees Brook and Buckley/Hey Brook.

The news comes more than two years after prolonged heavy rainfall led to the devastating Boxing Day floods of 2015, which severely damaged 324 properties in Rochdale and Littleborough and left 18,000 properties without power. A number of businesses were also affected as every river in Lancashire reached record levels.

The new scheme will improve flood protection for 1,000 residential properties and 200 local businesses as well as major infrastructure like the tram network, the bus interchange, colleges, a grid substation and waste water treatment works. The scheme is expected to deliver £455m worth of benefits over its lifetime.

“A number of flood defence measures have already been put in place since these events, including the storage basin at Calder Brook, but this is by far the biggest flood alleviation project in the borough and it’s something we’ve been working on with the Environment Agency for a number of years. This will have a transformative effect on the areas around the River Roch and make a huge difference to our residents and businesses.”

The council, Transport for Greater Manchester and the North West Regional and Coastal Flood Committee have also contributed money to the project.

The Environment Agency, working with the council, will now finalise preferred scheme plans and work is expected to start in summer 2019. The agency will now consult with local residents in September about the detailed plans and getting communities and businesses more involved.

A spokesperson for the environment agency said: “This is fantastic news for the Rochdale and Littleborough communities and something we have been waiting for a long time.

“We have been working on this scheme alongside Rochdale Borough Council and the local community to ensure a robust flood protection scheme is in place, to better protect 1000 homes and 200 businesses. Securing this funding is a great example of how working in partnership can help us get the best scheme for the area and we are delighted to be in a position to progress the project to its next stage.”

Rochdale MP, Tony Lloyd, said: “The 2015 Boxing Day floods were devastating for businesses and the families whose homes were flooded. Something had to be done so the hard work by Rochdale Council, in particular Councillor Neil Emmott and Francis Comyn, who joined Liz McInnes and myself in a delegation to the minister Teresa Coffey, was welcome and pleasing to see. The evidence was overwhelmingly in favour and I welcome this funding.”