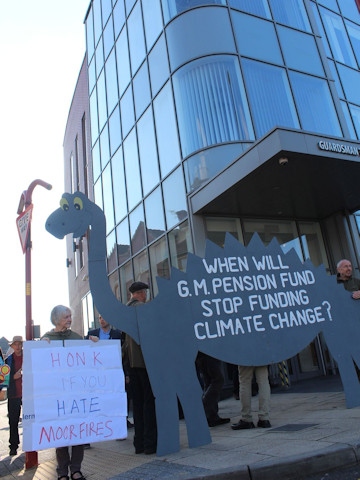 Photo: Manchester Friends of the Earth

A group of noisy pensioners and a large dinosaur greeted delegates at the AGM of the Greater Manchester Pension Fund on Friday (19 October).

Passing drivers hooted their horns in support as protestors urged the fund to do more to tackle the causes of climate change whose effects were seen in Moorland wildfires such as that at local Saddleworth Moor this summer. Charred heather from the moor was used to signify the devastation of climate change.

The GMPF is the UK’s biggest local authority pension fund and has over £1.2 billion directly invested in fossil fuel companies that engage in fracking, coal mining and oil and gas extraction.

One of the campaigners, Maggie Walker, said: "This is one of the largest and arguably one of the best UK pension funds, but it is not making a clear enough stand on fossil fuels. Experts tell us that global warming will only be reduced by prompt action, and that means that we cannot burn more fossil fuels.

"Investing our pensions in fossil fuel companies is financially risky as well as morally wrong."

The Fund’s annual report showed that they invested in Schlumberger Holdings, the company drilling for shale gas in Lancashire.

Maggie added: "It is good news that I was assured that this investment had since been sold. However, much larger investments in Shell, BP and other fossil fuel giants continue.

"We’ll keep campaigning until we get a clear commitment that the fund run by Tameside Council is addressing these issues by moving its investments out of fossil fuels.”