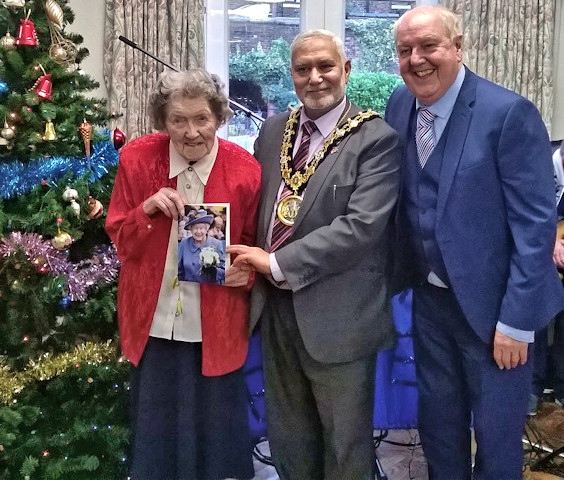 Whilst the society celebrated their 80th anniversary, the day was also a momentous occasion for one of their members, Sylvia Corfield, who turned 106 that very same day.

Mayor of Rochdale, Mohammed Zaman was in attendance to celebrate the special day alongisde Sylvia and the society.

Entertainment was provided by the Dolly Blue Band.

The Rochdale Blind Welfare Society began in December 1938 with the help of Sir Samuel Turner JP, who gifted the High Close Barn building to the society that same year.

A plaque at the High Barn Close building reads: “To Rochdale and District Society for Visiting and Instructing the Blind as a tribute to George Lissant Collins who for 40 years was Honorary Secretary of the Society, gained the respect and attention of the Blind of Rochdale by his constant interest in their welfare.”

According to the 1932 book, ‘A Chronological Survey of Work for the Blind’ by Henry J. Wagg O.B.E, The Rochdale and District Society for Visiting and Instructing the Blind was started in May 1870 in the Chapel of the Destitute, Whitehall Street, chiefly through the efforts of John Ashworth, the well-known Lancashire author of Strange Tales.

In 1896, a committee was formed, and a home teacher appointed, with a view to giving the blind fuller instruction.

In 1929, there were 189 blind persons on the local register, including 14 home workers.