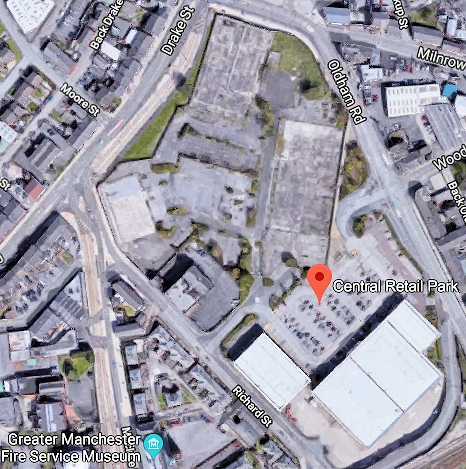 Up to 150 homes and apartments could be created at the five acre site, which the council has purchased as part of the authority’s drive to create 2,000 new homes in and around the town centre over the next 20 years.

The acquisition of the retail park will create a major boost for the plans, with the area being identified in a recent appraisal and master planning exercise as a prime site for development, due to its proximity to town centre facilities and major transport links.

An appraisal was undertaken as part of the Greater Manchester Mayor, Andy Burnham’s Town Centres Challenge, which aims to boost regeneration through a variety of methods, including the creation of new housing.

Town centre residential has also been given a further boost, with applications for 240 new homes, across four sites around Rochdale town centre, being submitted by Countryside Properties. All four sites, which are close to key transport links and amenities, will be determined this week.

Across the borough, Rochdale has seen Greater Manchester’s biggest increase in new homes being built, with over 10 times the average regional growth, this year. Government housing figures show that 799 homes were built in the borough in 2017/18, up from 315 in 2016/17, an increase of almost 154%.

New housing will help boost footfall to support the new retail and create a sustainable town centre with a number of different elements, including high quality public realm, shops and restaurants, transport links and housing.

Councillor John Blundell, cabinet member for regeneration at Rochdale Borough Council, said: “The acquisition of this key brownfield site forms part of a wider vision to create around 2,000 new homes in and around Rochdale town centre to maximise our £400m regeneration package.

“We have a growing population and are determined to bring forward brownfield sites, including use of our compulsory purchase powers where necessary. Residential development is a key focus for the council, with a particular drive to develop brownfield sites, such as Central Retail Park which has excellent access to our public transport network.

“With completion of new homes at a record high, we know that Rochdale is an attractive prospect for housebuilders and developers and we’re confident that Central Retail Park will play a key role in helping us meet our housing needs.”