You are Here: Home » News » News Headlines » A cleaner and greener borough with the Environment Agency

A cleaner and greener borough with the Environment Agency 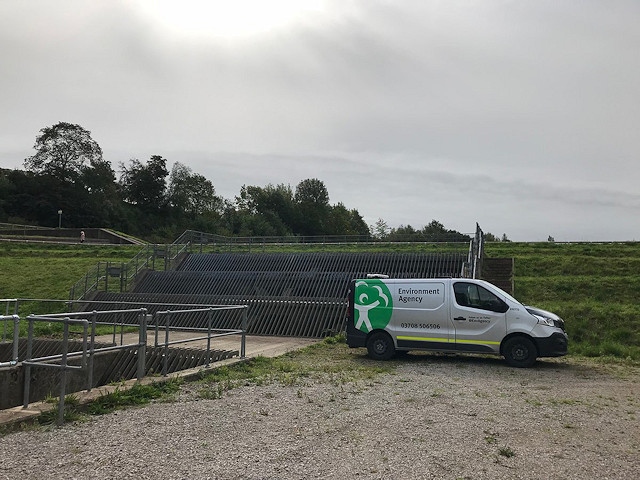 Environment Agency officers were out on the ground responding to incidents, clearing blockages from rivers and continually monitoring river flows and groundwater

As we ring in the New Year the Environment Agency (EA) have sent us its review of 2018 with a look back at the environmental highs and lows.

From the joint hottest summer on record to testing flood defences and getting winter ready, 2018 was a memorable year for Team EA. Here's what they have been up to in Rochdale over the last twelve months.

1,580 debris screens cleared, and the risk of flooding reduced

Over the last twelve months, our Operations Team have removed blockages and cleared 1,580 grids throughout the local area. Although this activity falls under our general maintenance activity, it is perhaps some of the most vital work we can do to help reduce flood risk to the community by ensuring the rivers and streams of Rochdale and Bury remain clear.

When it comes to general maintenance where and when we go depends on the location, time of year and rainfall. Grids around the Rochdale area are on a regular maintenance schedule with Team EA paying each one a visit every fortnight.

Even before flooding is imminent, our teams are working hard behind the scenes to reduce flood risk to homes and businesses across the country every day. We carry out regular maintenance and repairs, work with other organisations to prepare and advise on flooding matters, and constantly monitor river levels and forecasts.

Some sites without structures that accumulate debris or where there is less rubbish dumped don’t get checked during summer, unless of course something is reported. But come autumn and winter when we’re gearing up for floods, or after a flood, we’ll be out checking all of Rochdale’s main rivers and streams to reduce flood risk and protect people.

Reducing the risk of flooding is something we can all play a part in by simply disposing of our rubbish correctly. Keeping our waterways clear is always the first line of defence against floods.

Responding to incidents and protecting the Environment

2018 has been a challenging year for our environment. Complete with a seemingly unending summer, which parched our rivers and reservoirs, and a record number of fires it’s safe to say that the year has not been without obstacle.

In fact, over the course of 2018 in Greater Manchester alone, we responded to nine reports of waste fires and 6,014 incidents overall. These included reports of pollution in our watercourses, fish in distress, issues with odour and instances of illegal waste.

The summer of 2018 saw significant problems for region’s rivers and other water sources as the prolonged hot and dry weather left reservoir stores dilapidated and rivers low resulting in instances of fish in distress, fish mortalities and algal blooms as well as the threat of Temporary Use Bans (formerly known as Hosepipe Bans) for much of the North West.

As the Environment Agency, we have a big part to play in minimising potential impacts to communities and the environment and just like in a flood scenario, we put robust and well tested plans in place during the period of dry weather, ensuring our demand for water was managed in the best possible way by balancing the needs of people whilst protecting the natural environment.

To do this, we regulated water companies and non-water companies abstraction licence conditions and in Rochdale, our officers were out on the ground responding to incidents, clearing blockages from rivers and continually monitoring river flows and groundwater.

The good news is, as of today (Friday 11 January), we are officially clear of Drought Status. Thanks to some autumn rainfall, river flows and groundwater sources in Rochdale are appropriate for this time of year and soil moisture deficit is now recovering.

Another fallout from the summer of 2018 was the increase in reports of invasive species. Invasive species are the primary threat to plants and wildlife in the river and, if left untreated can cause potential flood risk.

Throughout Rochdale and Bury the main culprits in the invasive species line-up are Knotweed, Hogweed and Himalayan Balsam. These plants grow in water along the banks of rivers, especially favouring stagnant conditions and warm temperatures. Once present in a reach of a river it can establish dense mats of vegetation that can out compete native species, dominate watercourses, obstruct boats and prevent angling.

We have been managing invasive species as part of our maintenance programme for many years using a combination of eradication techniques. This year, throughout May and June our Operations Team focused efforts on the Lower River Irwell catchment and Buckley Brook as well as Radcliffe and Bury, using spraying equipment to remove growth.

The Environment Agency, working with Rochdale Council, continue to develop the Rochdale and Littleborough Flood Risk Scheme with drop in events being held in both towns in September 2018.

This allowed us to share project progress with the public and listen to the community’s vast local knowledge. The scheme itself also got some good news back in July with a Government funding announcement providing a £5m cash boost.

The scheme, which will be delivered in two parts, features a series of storage reservoirs built along the River Roch and its tributaries from Littleborough to the town centre.

Phase 1 for Littleborough will see a Planning Application submitted in the coming weeks and a public consultation event held in February. It is hoped that construction will begin in Littleborough in summer/autumn 2019, completing in 2021.

Phase 2 for Rochdale will follow with the Planning Application likely to be submitted in early 2021. The project programme currently aims to complete construction works in Rochdale by the end of 2023.

Once completed, the scheme will protect around 1,000 homes and 200 businesses. It is also hoped it will prevent future flood damage to the Metrolink, the bus interchange, colleges, an electricity substation and waste water treatment works, which were all severely affected in the Boxing Day floods of 2015.

There is lots of work to be done in between now and project start, including planning permission, awarding construction contract and obtaining project approval. We will ensure that the community is updated on the progress of these issues over the coming months. 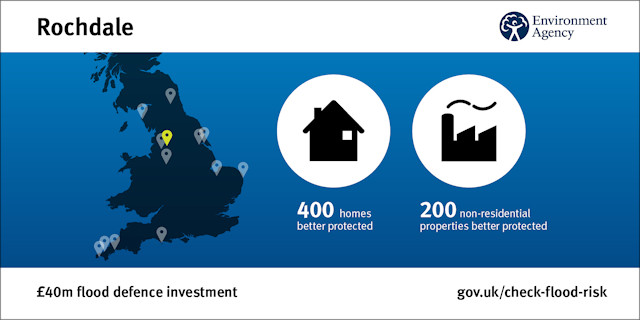 Field teams from our Winsford, Sale and Leigh depots used Close Park, Radcliffe as a site for two major training exercises in 2018.

With the aim of testing Operational Plans, Contingency Plans and Temporary Defence Deployment Plans across the Greater Manchester area, the live exercises saw major assets and temporary barriers put to the test.

The initial large-scale contingency test of the barriers took place in October during daylight hours and was the first time the temporary barriers, which form part of the Government’s national flood prevention plans, have been deployed and tested in the community.

The exercise, which ran from 10am, tested the barrier deployment plan and procedures, as well as working arrangements with partners. This ensured the barriers can be quickly and safely erected when needed during a flood with minimum disruption to residents and businesses. Once completed, 200m of demountable defences – made of lightweight aluminum and easily transported and erected by a team of EA engineers – were firmly in place and ready to offer protection to nearby properties should a flooding occur.

Fast forward to two months later, on 5 December, and our field teams upped the ante by putting the barriers to the test under the cover of darkness. This exercise once again boosted flood resilience across the region by training staff how to put the barriers up as well as testing our deployment plans.

To add to the realism, the test itself ended up taking place in dark, rainy conditions which helped to make it very life-like.

Both exercises were a resounding success and gave our field teams the confidence that the temporary flood barriers can be deployed across Greater Manchester with speed and effectiveness if they are ever needed.