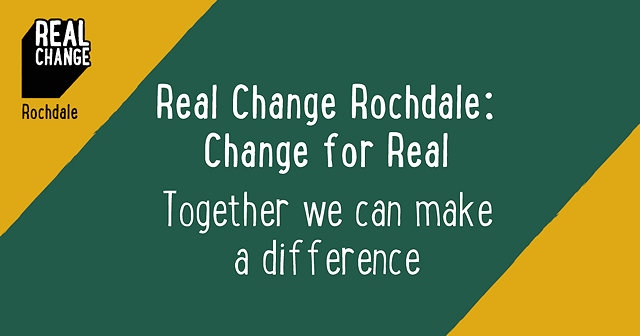 Rochdale has become only the second borough in Greater Manchester to launch a pioneering new scheme to help get people off the streets. Real Change Rochdale launched at the Borough of Rochdale Homeless Action & Information Network (BRHAIN) on Wednesday 16 January and builds on the experience of the Big Change Rochdale campaign which ran in 2017.

Real Change Rochdale will enable people in Rochdale to donate money online, which will go directly towards practical items to help people on the streets, including a deposit for a home, enrolment on a training course or new clothes for a job interview.

Donations go directly to people who are homeless or at risk of homelessness via local charities and voluntary groups including: Sanctuary Trust, Rochdale Borough Housing, Petrus, The Bond Board, Turning Point, Stepping Stone, Rochdale Council and Riverside Housing Group.

People with first-hand experience of homelessness will take a lead role in delivering the programme, as part of the Sanctuary Trust’s Pass It On scheme, which provides training and development opportunities for people who were previously on the streets.

Pass It On Manager, John Wigley, said: “We know the people of Rochdale are worried about rising homelessness, and have seen first-hand what can make a real change. We’re launching this scheme so that their efforts can have the biggest impact possible, for the many different types of people who become homeless, and for the long term so that everyone can help make a difference in their community.”

Over £1,000 has already been raised to kick-start the scheme, with Rochdale College Sixth Form winning the ‘Real Change Challenge’ competition set for supporters and partners.

The campaign is now looking for more people, workplaces and community groups to fundraise on behalf of Real Change and help tackle homelessness in their community.

Real Change Rochdale is only the second Real Change campaign to launch in Greater Manchester, after it was established in Wigan and Leigh in October 2018. The campaign there has been able to help end or prevent homelessness for 40 people in that time, distributing nearly £9,000 worth of grants via 12 local partners.

The cause is supported by the GMCA and the Riverside Housing Association and all donated money goes towards helping people in Rochdale. The aim is to eventually roll the campaign out across Greater Manchester.

Cllr Linda Robinson, Chair of the Rochdale Homelessness Forum, said: “It’s natural to want to give money to people on the streets, but we would encourage people instead to donate to Real Change Rochdale, so they can be assured that the money they give will make a massive difference to people who are homeless.

"I’m really pleased to see this new scheme get under way as it means people in our borough who want to help make a positive change can donate cash which will fund really useful, practical things to help that person build a life away from the streets permanently and end the cycle of homelessness.”