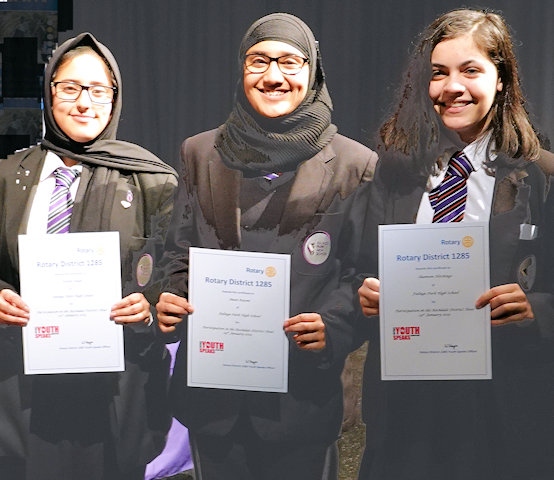 The Youth Speaks District heat competition is part of the nationwide competition run by Rotary International of GB and Ireland.

The audience of over 60 was treated to speeches six minutes long on a wide range of topics, with responses from a fellow student chairman and proposer of vote of thanks.

Falinge Park’s Head teacher Janice Allen welcomed all and said she had, as a teenager, been in a similar competition. She spoke of how an ability to talk in public is useful in later life and helps to build confidence. Public speaking is now part of the curriculum at Falinge school.

Beech House School’s Charlotte Wilkinson, ‘Life on the Streets’, talked of the plight of the homeless sleeping rough. Society should be more compassionate and not reject them. Finland has dramatically reduced the problem by rehousing people straightaway and by giving intensive advice and support.

Bolton Girl School’s Maryam Ali, ‘Is Beauty skin deep?’, spoke of how appearance is an obsession in modern life. She made the plea that we should look more to the whole person and not just judge by looks. Social media and editable facial photographs have made the problem worse.

Bury Grammar Boys school’s Sam Carroll, ‘Are Apple’s prices realistic?’, gave his thoughts on the runaway success of Apple in the phone market. He made comparisons with other company’s products and discussed how Apple’s company image and past performance ensured success.

Falinge Park’s Emilia Gartside, ‘A dog’s purpose’, talked about the cruelty inflicted on animals for humans’ entertainment, giving examples from the recent film ‘a dogs purpose’ showing a dog swimming in freezing water and the inhuman treatment in the Thailand Tiger temple and pleaded for more kindness.

Ladybridge High Sschool’s Marc Thompson described ‘The Under-preparation of Future Generations’. By not being given more responsibility at a young age, youth will be found wanting in later life and career.

Oldham Hulme Grammar School’s Jessica Sheridan, ‘We are family: Brothers and Sisters’, discussed how there can be friendships or differences within families, but people work out ways of living together. A similar understanding of people not within the family would be a good thing for society.

Falinge Park senior team’s Iman Kazmi, ‘The Search for the Silver Platter’, wanted celebrity pop singers and others to avoid saying unpleasant things on social media. They should not encourage young people to talk and behave badly like themselves implying that is the way to make one’s fortune.

Ladybridge High School’s senior team’s Amaan Patel, ‘We are more than Pink or Blue’, discussed that blue for boys and pink for girls should be an outdated concept saying this is a very narrow stereotypic message. A healthier attitude is to allow everyone to be themselves.

Each speaker was asked a question from a nominated questioner, testing their understanding of their subject/topic.

The adjudicators John Wroe, Michael Knowles and Patricia Russell commented on the great variety and quality of the speeches and also gave feedback to teams afterwards.

Rochdale’s Mayor Councillor Mohammed Zaman presented certificates to all the students and said he had greatly enjoyed the event.

Rotarian Warren Heyes, the Youth Speaks officer for Rotary District 1285, covering North West England and the Isle of Man said: “The skills and confidence shown at such a young age were simply amazing.”

Winners will go on to the next stage at the district final at Frodsham in March and could even get to the March regional final at Wrexham and the national final at Nottingham in May.