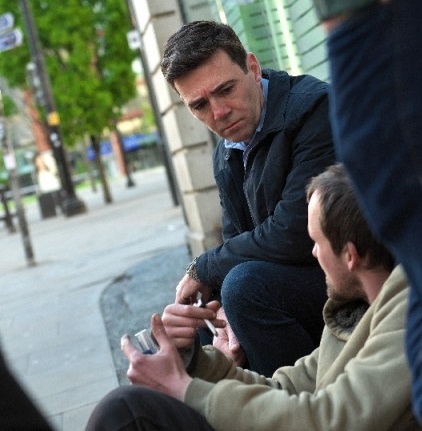 Greater Manchester’s unique and ambitious approach to tackling rough sleeping has been praised for its 'extraordinary impact' by a widely-respected expert on global homelessness.

Dame Louise Casey, Chair of the Institute for Global Homelessness and a former deputy director of Shelter, has endorsed the city-region’s A Bed Every Night strategy following an assessment conducted last week.

However, she identified the time-limited funding model behind the programme, and its over-reliance on voluntary support to deliver daily night shelter accommodation, as areas requiring improvement.

A Bed Every Night has worked to deliver accommodation plus support to every rough sleeper in the city-region every night of the week since the start of November. The latest figures show that 1,635 people have been assisted into accommodation in just over three months, with 466 of those now moved through into a more permanent home.

Speaking at the Greater Manchester Combined Authority (GMCA) on Friday 1 March, Dame Louise said: “Permanently ending the need for rough sleeping within Greater Manchester now appears achievable. The extraordinary impact of A Bed Every Night – more than 1,600 people helped in little over three months – and the close collaboration between all 10 boroughs, the private and public sectors and other partners, is truly impressive.”

A Bed Every Night has evolved since its launch to better meet the needs of local rough sleeping populations in each Greater Manchester borough. In her assessment, Dame Louise identified an over-reliance on voluntary sector support on the ground, and recommended the programme would benefit from additional resource properly managed.

In addition, the funding of the scheme is time-limited; Dame Louise found that a more substantial and permanent funding model, possibly supported by central Government, would add certainty in the sector and aid delivery. She also emphasised that A Bed Every Night remains one part of patchwork of approaches and programmes focused on tackling homelessness in Greater Manchester in all its forms.

“I travel around the world speaking on homelessness and assessing projects and I have worked in this area for a great many years”, added Dame Louise.

“I have a personal interest in Greater Manchester’s work as my mother grew up in Sale. This city-region’s approach is unique, 10 local authorities working in collaboration. Consequently, what is achieved here could make a real impression on public policy not just nationally but internationally.

“The Mayor of Greater Manchester frequently refers to the rough sleeping situation in our country as a ‘humanitarian crisis’ – he is quite right to do so. Consequently, it is particularly impressive to note Greater Manchester’s recent fall in the official numbers of people sleeping rough on your streets. There is of course so much more to be done, on homelessness more broadly not just rough sleeping, but in a matter of months it is clear to me that the city-region has made a positive impact.”

The GMCA has approved the extension of A Bed Every Night by a month to the end of April in order to assess Dame Louise’s findings and deliver a proposal to extend rough sleeping provision into the spring and summer.

Also approved was a proposal to create a homelessness hub at the Longford Centre in Manchester, funded by the allocation of £1 million from Trailblazer funding.

Speaking at the Combined Authority meeting, Andy said: “I am very grateful that Dame Louise agreed to come to Greater Manchester to assess what has been going on at the coalface. There is nobody better placed to have taken stock of our ongoing work.

“We have been running A Bed Every Night since the beginning of the November and we are the only city-region in the country to have sought to provide a place for everybody to go every night of the week. It is not a perfect scheme but it is a significant improvement on what we were able to offer last winter.

“I want to reiterate my immense gratitude for the support of everyone in the scheme, which has helped more than 1,600 people over the last few months. It is really important that we recognise the essential role of volunteers in delivering A Bed Every Night on the ground, alongside hardworking teams of professionals from each of our 10 local councils.

“Today we have secured a little more time to develop and implement what comes next. There is a need to review what we have been doing and then present a proper proposal regarding the next phase. That is why today we have extended A Bed Every Night by a month, to the end of April.”

An initial cost-benefit analysis of A Bed Every Night demonstrates that the expense of running the scheme is not a significant burden on the public purse relative to approaches taken in the past. Research by the charity Crisis shows that the cost to public services of one person sleeping rough is over £20,000 a year, while the GMCA estimates the cost of a place per night in A Bed Every Night is £32 – at £11,680 annually around half the cost of sleeping rough.

Individuals continue to move out of A Bed Every Night accommodation and into more permanent solutions, similar to the places offered by the existing Social Impact Bond (SIB), a roughly £2 million programme that has already assisted 222 of the city-region’s previously most entrenched rough sleepers.

Last month, Great Places Housing Group – a housing association based in Manchester with affordable homes, social housing and supported housing in the North West and Yorkshire – was announced as leading a Housing First consortium assisting up to 400 people into their own homes with support over the next three years, backed by £7.6 million of Government funding.

A Bed Every Night is funded by the city-region’s local authorities and is supplemented by private donations from concerned individuals and businesses. For more information and donate visit: