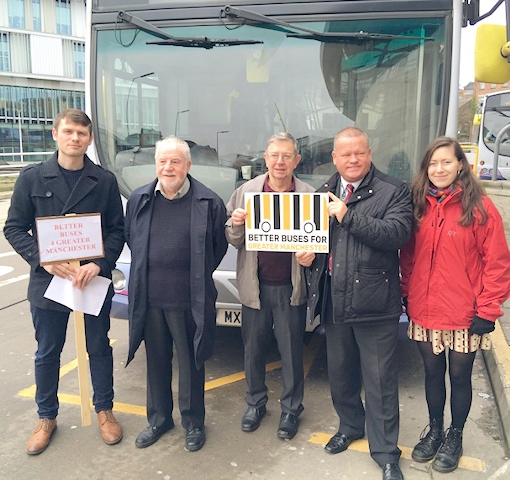 Rochdale Council is throwing its weight behind a campaign to take Greater Manchester’s buses back under public control.

Council Leader, Councillor Allen Brett and Councillor Phil Burke who sits on the Transport for Greater Manchester Committee, are urging city region mayor Andy Burnham to bring in a fully regulated system that would allow him to dictate fares, routes, timetables and ticketing.

Mr Burnham pledged to overhaul the bus network during his election campaign and is set to decide whether to enter into a ‘partnership’ with private operators, or bring it fully under his control.

Pressure group Better Buses claims that passengers do not get an adequate service under the current system – and that regulation would mean more affordable fares and an increased number of evening and weekend services.

Campaigners also say this would create the opportunity to introduce a ‘smart ticket’ similar to the Oyster card passengers use in London – the only city in Britain whose transport system was not deregulated in the 1980s.

Polling carried out by Survation for Better Buses found 76 percent of the 1,000 people asked wanted to see a return to full regulation and Rochdale Council Leader, Councillor Allen Brett says he is fully on board with the campaign.

He said: “What we really need if bus services and routes are to be improved in Greater Manchester is re-regulation which needs to be done as quickly as possible, that’s the only way to stop the decline in bus usage and patronage.”

Councillor Brett, who was a director of the old Greater Manchester Buses prior to privatisation, added: “This is something I’m passionate about 100 per cent, and will argue for behind the scenes.”

And Councillor Burke said he would also be putting a motion to Rochdale Council calling for full regulation and support of Better Buses’ aims.

Speaking to members of the group at the council’s Number One Riverside offices, he said: “We need re-regulation, we have been fighting for re-regulation. We do want them to be renationalised, we want to take bus services back in our control, we fully support your campaign.

“The leader will do whatever he can to get the buses back under the control of the local authorities.

“We need to get bus services back to local people for local people, to use when they want to use them.

“I think Andy Burnham needs to listen to the leaders from all the authorities and get a clear message from the leaders that this is what residents want.

“They want reliable, clean bus services that will take them from A to B with no issues, not a poor, irresponsible bus service.”

However, OneBus, a collective which represents 18 Greater Manchester bus operators, says Better Buses are misleading the public, and driven by a pro-nationalisation political agenda.

It says that TfGM can already specify what it wants from the bus services it pays for and that companies make the biggest public investment via their concessionary fares scheme.

Last month chief executive Gary Nolan said partnership arrangement was the best way to deliver high quality bus services, which was why it had developed a £100m blueprint to build on ‘improvements such as new greener vehicles, smarter ticketing and bus wi-fi’.

But Councillor Burke rejected these claims: “It isn’t political, we are there for the local residents to put their case forward and try to get a better bus service. It’s okay these commercial operators saying there’s a hidden agenda. There’s no hidden agenda. Our agenda is to provide a good reliable bus service for the people of the north west.”

Pascale Robinson, spokeswoman for Better Buses, claimed it was OneBus that was misleading the public.

She said: “At the moment bus companies cherry-pick the most profitable routes and they take public money to fund anything else that is socially necessary, and that is just not sustainable.

“The benefit of reregulation is you can cross-subsidise, so you can use profits from those busy routes to fund the socially necessary routes.”

Ms Robinson added: “I think cross-subsidising is the cornerstone of any world class bus system, you can’t do that with enhanced partnerships.”

Andy Burnham is expected to make a decision on whether to enter into a partnership with private bus operators, or go for a fully regulated bus network by the end of the year.