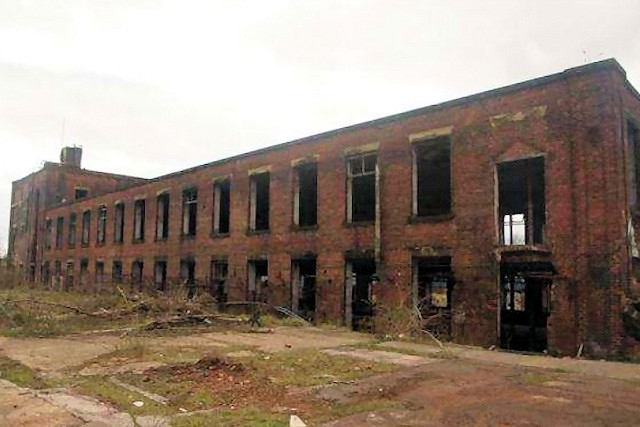 Rochdale Council’s planning committee met this week to consider the latest crop of development proposals including an 11-metre amateur radio mast and conditions attached to a renovation bid for an ‘eyesore’ mill.

These are the issues considered by the cross-party panel, which is chaired by Councillor Carol Wardle.

Permission was granted ‘in principle’ for this long-derelict Victorian mill to be demolished and replaced with 47 new homes in March – on the proviso that conditions would be agreed by applicant Hallmark Developments at this month’s meeting.

The developer asked the committee to remove conditions blocking development of the site until they had ‘entered into contracts’ with a builder.

The council said this was to prevent the premature razing of the Grade-II listed mill, and ensure the site was not left vacant indefinitely after the building was knocked down.

Chris Grieves, managing director of Hallmark Developments, urged the panel to allow his company to demolish the ‘eyesore’ mill ‘sooner rather than later’.

He said: “The building no longer contributes anything to the conservation area, is derelict and causes a problem to the neighbourhood.”

Mr Grieves also asked that proposed section 106 financial contributions to local infrastructure were made ‘subject to viability’ – meaning they would depend on the profitability of the site.

He told the panel: “If I can’t make a reasonable developer’s profit, this site isn’t going to be developed, it’s as simple as that. Not to include all the contributions is effectively giving this application a death sentence.”

There was agreement among the panel that all financial contributions from the developer should be subject to a ‘viability assessment’, but they were more split on removing the conditions.

Councillor Shakil Ahmed told Mr Grieve he was trying to put ‘conditions on the council’ following last month’s meeting, and he should agree to what officers had put forward.

But Councillor Phil Burke said it was important to compromise.

He told the meeting: “This is a golden opportunity for the area we can’t allow to escape.”

And it was Councillor Burke’s motion – which proposed making all potential financial contributions ‘subject to viability' but keeping conditions preventing early demolition – that was ultimately approved by the committee.

This application was up for a third time after a voting stalemate in December was followed by the chair and vice-chair’s failing to agree on whether ‘very special circumstances’ applied to this green belt development.

The proposal is to demolish a pigeon cote next to Springbank Kennels, in Wardle, and replace it with a new two-bedroom bungalow about half-the-size again of the existing structure.

Applicant Joe Bennet, who runs the kennels, wants to sell the business but remain in his family home nearby.

He says the kennels would be almost impossible to sell without an on-site bungalow, as prospective buyers will want a 24-hour presence close to the animals for welfare and insurance purposes.

However, council officers recommended the application be refused on the grounds it would be ‘inappropriate development in the green belt’.

Mr Bennett’s agent Malcolm Percy told the panel: “While to the officers the applicant’s reasons for wanting the bungalow are not special, to the applicants, it would allow them to move on with their life, which to them – as with most people – is very special.”

He also said that on-site accommodation would be ‘critical’ for the safety of the dogs and cats, many of which were of high financial value – as well as being regarded as ‘members of the family’.

However, Councillor Jane Howard told the meeting she felt that while Mr Bennett had difficult ‘personal economic circumstances’, they did not amount to a reason to grant planning application.

Councillor Shah Wazir took a more sympathetic view, saying that ‘safety, security and welfare’ could only be assured if the application was granted.

He put forward a motion proposing planning permission be granted on the condition the bungalow could only be occupied by kennels staff, which was carried by the committee.

Decision: Granted on condition only new kennels staff can occupy the bungalow.

Amateur radio enthusiast Paul Horrox was given permission to install an aerial with a maximum height of more than 11 metres in the back garden of his terraced house in Wilton Grove, Heywood.

According to planning reports, it will be visible from a ‘significant number of neighbouring properties over a relatively wide area’ – including Wilton Grove itself, Greenfield Court and a nearby recreation ground.

When not in use, the yet-to-be-fitted hexagonal aerial – which has a diameter of 4.2 metres – would be retracted to a height of about 6.5 metres on an existing mast.

However, officers recommended approval of the application, stating the wires and spokes would likely not be visible to the naked eye, particularly given its ‘grey-colour treatment’.

However neighbour Jack Ramsden said its height, size and lack of screening would be a detriment to the area.

He added: “It’s not reasonable to have something that big in a small garden.”

North Heywood ward councillor Ray Dutton said he was hoping a compromise could be found between the two parties.

“When you are in your garden, your home is your castle, you have lived there all your life, then all of a sudden you have got an ‘alien’ at the side of you – why does it need to be so big?”

“I’m a bit concerned that on that aerial is allowed to its full extent, its huge.”

Councillor Shah Wazir also called for a compromise – but Mr Horrox told the committee he had done everything he could to take neighbours’ concerns into account.

He said: “If there was an option I would have put it forward.

“There’s no other option that allows me to use my licence and gives me the performance of a small aerial in such a small space. There’s not another aerial that does that.”

Phil Burke, however, said the report and presentations to the committee led him to the conclusion the application should be granted.

His motion to approve the application was carried by six votes to five.

Change of use from shop to taxi booking office, Manchester Road, Castleton

Mohammed Razaq’s application to change the use of his vacant shop to a taxi booking office was thrown out by the committee.

The end-of-terrace retail unit is part of a parade of shops in Manchester Road, Castleton, which all have flats above them.

The plan to run a taxi booking office from it was recommended for refusal by officers, due to fears the parking bays outside would be ‘monopolised’ by taxi drivers at the expense of residents and shoppers.

They also raised concerns over road safety on what is already a ‘busy highway’.

She gave her two main reasons as the likely parking problems that would result for residents and shoppers, and late-night disturbance to residents from taxis.

Mr Razaq said his drivers would not use the bays in front of the shops as they would usually be notified of fares via a phone app and would generally operate from home.

He added they also had permission to use the back of the Blue Pitts pub if needs be.

But councillors questioned why he would need a booking office if the intention was not for customers to use the premises to get a taxi.

And when pressed by Councillor John Taylor, Mr Razaq said: “It’s not going to be every minute, maybe 10-20 cars a day.”

He added that he would also allow residents to visit the office to pre-book a car.

Councillor Phil Burke moved a motion to refuse the application based on the grounds of road safety, traffic congestion and that he remained ‘unconvinced’ that the parking bays would not be taken up by taxis.