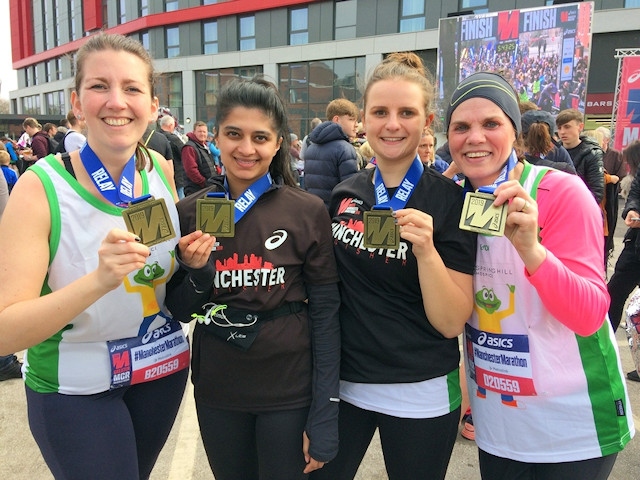 In total, fifteen dedicated fundraisers went the extra mile for the hospice in their marathon efforts to raise money. The runners were hard to miss in the crowd as they proudly displayed Springy, the Hospice mascot on their running vests.

With 20,000 runners this year, the Manchester Marathon is now the second largest in the country.

Determined to put their best foot forward for their chosen charity were runners from Oulder Hill Community School, onePT Fitness and Team Bernadette Bower. Members of each team have a personal connection to the hospice which has cared for friends and loved ones.

With this year marking the 30th Anniversary of the opening of the hospice in Rochdale it’s this local community support that will see it continue to serve patients in the years to come.

Barbara Lloyd, from the Hospice Fundraising Team, said: “We are very proud to have such fantastic support.

“As well as it being a big personal challenge, everyone felt they were running for a local charity that was close to their hearts and we are so very grateful for that.”