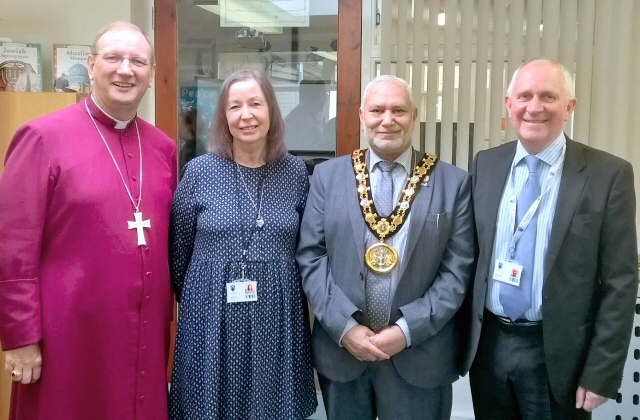 Over my mayoral year, I have received incredible support from so many people throughout the borough and I am so grateful. It is my Mayor’s Civic Charity Ball on Friday (12 April) where I am hoping to bring all of the community together to say thank you. The theme of the ball is unity and I want to send a simple message that life is better, and we can go a long way together, when we are all united.

Winston Churchill once said that we make a living by what we get but make life by what we give.

In Rochdale, we have so many generous individuals, organisations and businesses who always give to great causes and I would like to show them my appreciation and send thanks to them before my mayoral year is over. It has been a great experience for me over the last 12 months.

Monday, I attended St Andrew’s Primary School & Nursery with councillor Ashley Dearnley and the Bishop of Middleton, Mark Davies, to officially open the school’s new first floor extension. As we arrived, it was nice to see the young people waving flags, giving us a warm welcome.

A presentation was given in a special assembly by the headteacher, Mrs J A Rainford, and the school board and governors gave speeches. The children also sang songs and musical performances were given, which were inspiring as well as entertaining as the songs projected messages of unity, love and courage. I was glad to see the young people play a unique role in the day.

I officially cut the ribbon to open the extension, which provides the school with extra space as they have a high number of pupils attending. The pupils then presented all the guests with daffodils that they had grown. It was a real honour for me to open this new space for them.

Thank you to the school staff for their hospitality, to the Bishop of Middleton and to Ashley Dearnley who works closely with the school to support them and the community they are in. 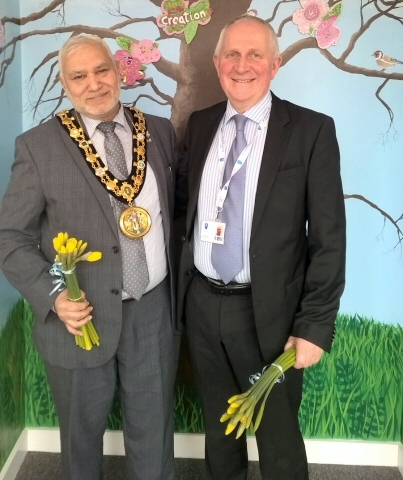 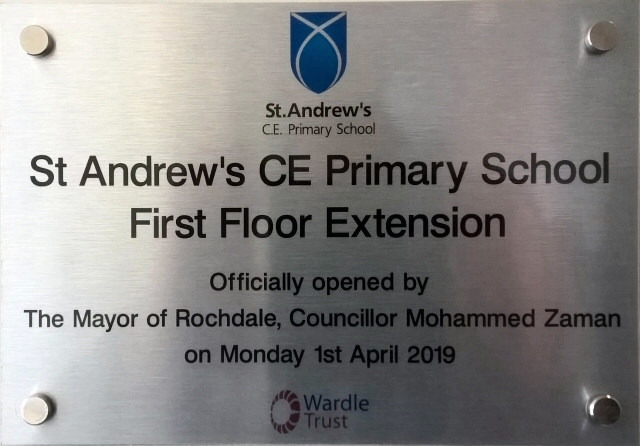 Tuesday, I was invited by the Lord Mayor of Manchester, Councillor June Hitchen, to a ‘Civic Heads Dinner’ at Manchester Central Library. This was something different for me to experience, as I hadn’t attended an engagement like this before that was only for Mayor’s, Mayoress, Consorts or Escorts and their Deputies.

The library has recently been refurbished with beautiful internal work and I was glad to see many students making use of the space and facilities.

Over a really nice dinner, myself and the other mayors exchanged the engagements we had been to, the ideas we had for the future and discussed how we want to organise an annual event for former mayors to get together and stay in touch.

Thank to the Lord Mayor and her team for hosting this dinner, both myself and my daughter, Mayoress Naaira Zaman, enjoyed the evening. 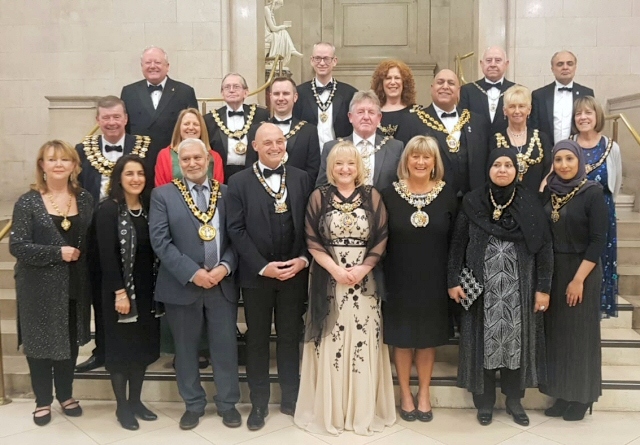 Wednesday, I went to an NSPCC Coffee Morning at Rochdale Rugby Club, organised by the Heywood branch of NSPCC. This was my second or third visit to an NSPCC coffee morning and I have noticed the events always have huge support from the community.

A raffle and a tombola were hosted to raise funds for the charity. It was good to see so many people putting in the effort for a good cause, especially one that helps children in desperate need.

Thank you to the volunteers who do such a great job and to Margaret Ave and Christine Sutton for the work they do on a regular basis to raise vital funds. You all benefit so many.

I attended Hollingworth Lake for the launch of ‘Sail After Service’. This was an opportunity for veterans and pensioners to go out on the boats on the lake and experience sailing.

The weather was not good, but everyone came to enjoy sailing and remember the times when they were more active. I was particularly proud to see veterans in wheelchairs getting the experience and showing spirit. Thank you to Caen Matthews, the Armed Forces Support Officer at Rochdale council, and the team at the lake for organising this and to councillor Janet Emsley for attending. A thank you also goes to those who attended despite the cold weather. 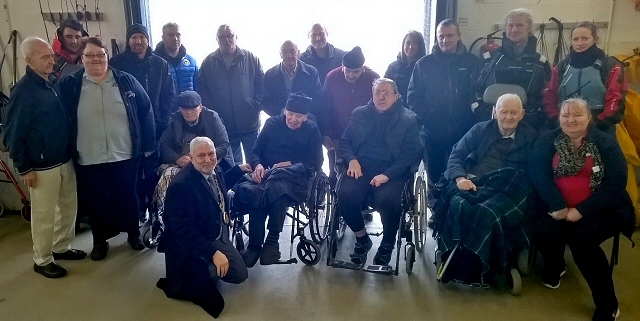 I invited Sayeda Kauzar, the Chief Editor of Dhanak online newspaper based in London, to the Mayor's Parlour. She raises awareness on various issues online and always tries to work the community she’s in. She was on tour of Greater Manchester to meet people like me and find out about our local issues.

Thank you to Sayeda for visiting the town hall and signing the visitor’s book in the parlour. It is always warming to see people go out of their way to help others. 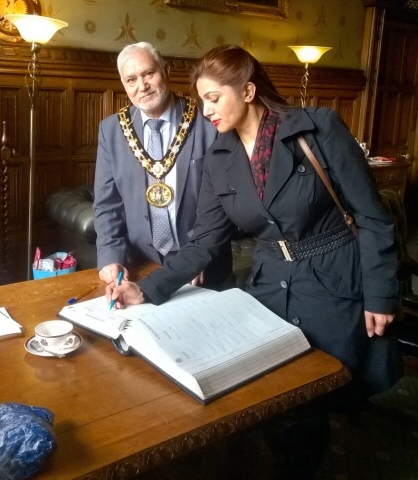 Wednesday evening, I was invited to Greater Manchester Police Museum for a Team High Sheriff event.

Organised by the High Sheriff of Greater Manchester, Dr Robina Shah, this was one of her last engagements as the High Sheriff, where she invited her ambassadors, other dignitaries and various guests to present awards to the ambassadors.

Team High Sheriff focuses on helping young people by promoting and acknowledging what matters to them the most and the ambassadors have made good progress throughout this High Sheriff year and gained achievements. The young people commented how they felt valued through the project and enjoyed working hard as a team to raise the profile of Team High Sheriff whilst learning new skills.

I will always remember Dr Robina Shah for the great contribution she has made to society over this past year and I wish her all the best in her future.

Thursday, I attended one of the most entertaining events I have been to yet with other mayors from across Greater Manchester. We all took part in the mayoral annual transport civic visit to the Museum of Transport, Cheetham Hill.

We departed from the museum by a vintage bus to the Museum of Science and Industry in Manchester centre to view the original Rocket Steam Locomotive - Stephenson's Rocket - which was at the museum before it returned to London. There was a huge crowd of visitors waiting to see the first steam engine.

We then travelled to Heaton Park where we went for a ride on a heritage tram before departing for the East Lancashire Railway for a ride on the railway saloon coach where we had a delicious dinner. I had a very good time as we travelled to Ramsbottom on the steam train. We all had the opportunity to look at the steam hole and how the train was driven by coal.

This was a nice get together for all the Greater Manchester mayors just before we come to the end of our mayoral years.

Thank you to Keith Whitmore for keeping us informed on the day and to his team and volunteers who organised the visit. The day was incredibly entertaining, I will definitely remember this trip. 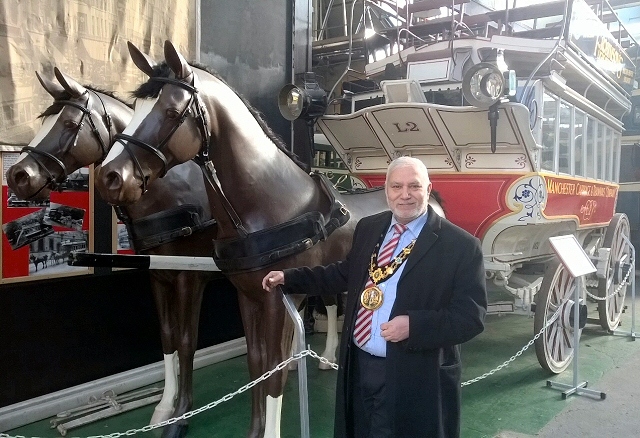 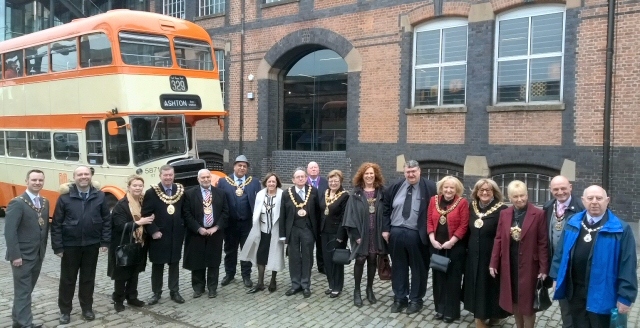 Saturday, I was invited to The Coach House, Littleborough, for the opening of Rochdale Embroiderers Guild Exhibition of Embroidery and Textiles.

This is a local group who have regular meetings and through their embroidery skills have created real masterpieces that are now on display in the Coach House. Some of the items on display are truly outstanding. I asked how they produced these amazing displays of lakes, mountains and people in such a neat and tidy way – I hope to learn their skills one day.

The group explained how these embroidery sessions are very important to their social life and how they hope to transfer their skills to younger people, to keep the hobby alive for the next generation.

Thank you to all of the participants who displayed their work at the exhibition and a special mention to the Rochdale branch chair, Barbara Bauckham and her secretary, Gillian Holden for putting on such a good opening event. Keep up the good work. 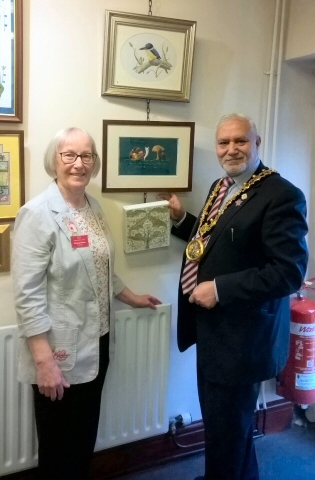 Saturday evening, I attended the Mayor of Whitworth’s Civic Charity Ball at Whitworth Riverside where I met the mayors of Todmorden and Rossendale.

This was a Ceilidh Night where guests were entertained with an evening of Scottish music and dance including a dance caller, 4-course dinner and raffle. A highland piper played as we were welcomed into the building, which I enjoyed.

A big thank you to the Mayor of Whitworth, Madeline De Souza, for inviting me and for the hospitality arranged for myself and my daughter, Mayoress Naaira Zaman. We very much liked the evening.

Sunday, a dog show / fun day was held at Angela Bird Charity on Taylor Street, Heywood in aid of my six chosen charities this year. A range of local people entered the competition and it was interesting to see the good relationships between the animals and their owners.

Thank you to the individuals who gave raffle prizes and to the businesses who sponsored the event. I am extremely grateful to all who took part to raise money for the Mayor’s Charity Appeal. I hope we can continue to host the event in an even bigger venue next year.