You are Here: Home » News » News Headlines » Freemasons walk the district to raise hundreds of pounds for charity

Freemasons walk the district to raise hundreds of pounds for charity 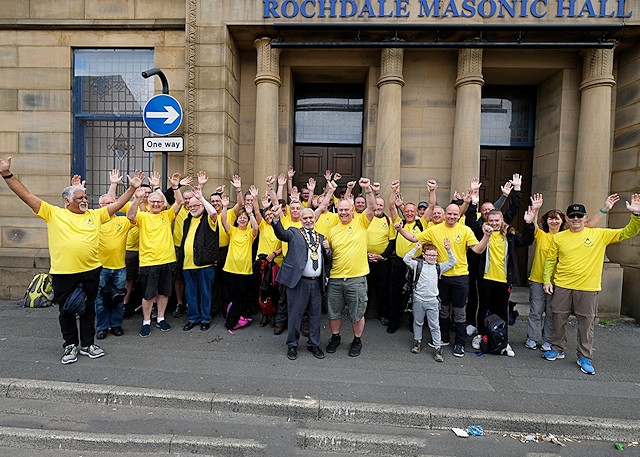 50 walkers from Rochdale, Todmorden and Bacup Masonic Lodges walked a 23-mile circular route around the district

Local Freemasons have raised hundreds of pounds for local charities after walking the district on Saturday 18 May.

‘Walk the District’ is a new initiative introduced this year and involved 50 walkers from Rochdale, Todmorden and Bacup Masonic Lodges together with family and friends who walked a 23-mile circular route around the district.

The then-Mayor of Rochdale, Councillor Mohammed Zaman, gave his support and was present at Rochdale Masonic Hall to wave off the walkers at 7.30am.

Age was not a barrier and walkers’ ages ranged from seven to 70.

Even District Chairman Doug Smith, who is no spring chicken, followed a route through Whitworth, Bacup, Todmorden, Littleborough and then back to Rochdale.  As he completed the course, he was asked for a comment but was too tired to speak.

Event organiser Councillor John Taylor was delighted that he expects the walk to have raised over £1,000 in donations.

A secondary but equally important objective was to raise local awareness of Freemasonry in general and to highlight some of the charitable work undertaken by the fraternity.

Freemasonry is one of the world’s oldest and largest non-religious, non-political, fraternal and charitable organisations.

Its roots lie in the traditions and ceremonies of the medieval stonemasons who built cathedrals and castles.